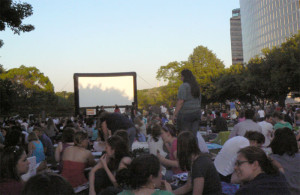 Rosslyn’s “I Love the ’90s” outdoor film series started off with a crowd-pleaser Friday night. About 150 people crammed onto the field at Freedom Park to watch Alicia Silverstone, Brittany Murphy, and Paul Rudd in the 1995 classic teen comedy “Clueless”.

Space was at a premium. Most of the crowd arrived with picnic blankets in tow about an hour before show time.

Sultana Khan was there with friends about an hour and a half before the movie started with plenty of sandwiches, cheese, hummus, and other munchies.

“Seriously, this movie is, like, amazing,” she enthused, chanelling the flick’s San Fernando Valley spirit. “It’s a standard, and Cher is a total Betty.”

Several picnicking groups knew the script by heart, which meant a good section of the audience recited aloud one of the most memorable lines in the film:

“Why should I listen to you, anyway? You’re a virgin who can’t drive.”

This coming Friday the “gnarly” SNL-skit-turned-blockbuster Wayne’s World will be playing on the big screen. Others films in the series include Airheads, Home Alone, and Johnny Depp’s highly underrated Cry Baby.