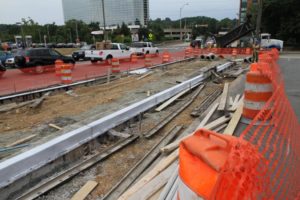 Work is underway on a series of pedestrian improvements on Shirlington Road.

The sidewalk in front of the Weenie Beenie, between Four Mile Run Drive and 27th Street S., is being expanded from 5.5 feet to 12 feet. In addition, the traffic signal at Shirlington Road and Four Mile Run Drive is being upgraded, LED street lights are being added and other aspects of the streetscape are being improved.

The improvements are intended to make bike and foot travel safer in an area of high pedestrian and vehicle traffic.  The sidewalk serves pedestrians heading between Nauck and Shirlington, as well as cyclists and joggers heading between the W&OD Trail and the two sections of the Four Mile Run Trail.

“We’re trying to greatly upgrade that pedestrian/bicycle connectivity,” said Arlington County Director of Transportation Dennis Leach. He added that the upgrades were made necessary, among other reasons, due to the narrowness of the preexisting sidewalk.

“We’ve had some real concerns,” Leach said. “The existing condition is poor.”

In addition to safety enhancements, the $196,000 project will also improve the landscaping along Shirlington Road, upgrade the bus stop at the intersection with Four Mile Run Drive, and bolster the handling of storm water to prevent runoff into Four Mile Run.

Leach said the project is the “first phase” of a larger pedestrian improvement initiative that will see the widening of the Shirlington Road bridge over Four Mile Run. Widening the bridge and the corresponding sidewalk will allow more than one cyclist to cross at a time on the busy stretch. The Four Mile Run Trail alone, Leach said, handled 1,300 people per day during the month of May. 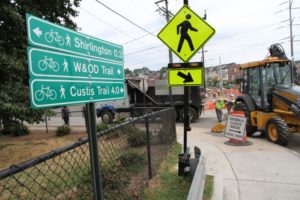 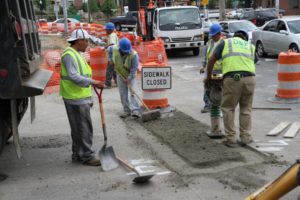 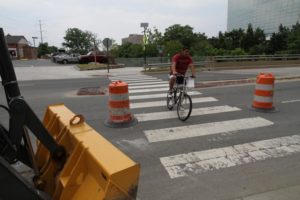 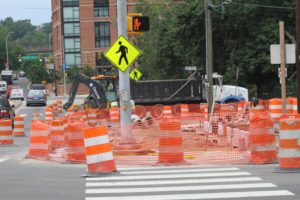