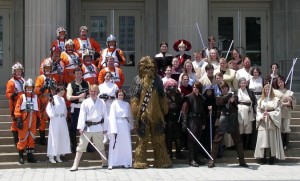 If you’ve ever wanted to look like your favorite Star Wars character, now’s the time to learn how to do it.

With Halloween just around the corner, Arlington Public Library is hosting a Star Wars costume event this coming weekend. Representatives from the Rebel Legion and the 501st Legion — international costuming enthusiast organizations for the Star Wars good guys and bad guys, respectively — will be on hand at Arlington Central Library (1015 N. Quincy Street) on Saturday to discuss how they make their elaborate Star Wars costumes.

Star Wars geeks and casual fans alike are invited to come take photos with fully-costumed members of the local Rebel Legion and 501st Legion (slogan: “Bringing order to the galaxy since 1997”). For those who want to follow in the footsteps of legion members, be prepared for intricate instructions on how to become an authentic storm trooper, Jedi knight or bounty hunter.

“This program will be very detailed, so it is recommended for upper-elementary school kids, teens and adults,” the library said on its blog.