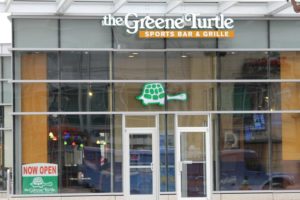 The Greene Turtle (900 N. Glebe Rd) in Ballston has officially opened for business.

More than 50 televisions hang on the walls and certain booths have individual TVs that patrons can control. TVs along the windows allow fans to keep one eye on game action while keeping the other on action outside.

General Manager Scott Smith says patrons can expect the same service and sports environment people enjoy at The Greene Turtle’s other locations. He wants people in the area to stop by and give the newest one a try.

The Greene Turtle touts fare above and beyond typical bar food. New York strip steaks and crab cakes are a couple of the less traditional sports bar offerings.

“We pride ourselves on the execution of our food,” Smith said. “We want to bring a different level of service to the area.”

Another aspect that sets this place apart is the customer loyalty program. Customers can purchase one of the famous Greene Turtle mugs and bring it back for future fill-ups.

The Greene Turtle has more than two dozen locations around the D.C./Baltimore region, including two locations along the Delaware shore. The new Ballston location will eventually have outdoor seating when the weather improves.

Although the Greene Turtle will technically be a Redskins and Virginia Tech bar, they guarantee that not just local games will be shown. Every game will be on at least one of the TVs. Smith does point out, however, that Virginia Tech is the building’s landlord so that team will be particularly celebrated.

Besides the new Virginia Tech development, more improvement projects are slated for Ballston. The hope is that the Greene Turtle will gather a solid following, and be considered one of the forefront examples of positive expansion.