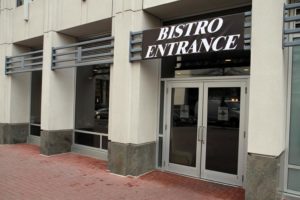 One of Arlington’s busiest restaurants is expanding.

Ray’s the Steaks in Courthouse (2300 Wilson Blvd) has added an adjacent bistro dining area called “Retro Ray’s.” While sharing a kitchen with the larger Ray’s, the new bistro will be operated as a separate entity. It will not take phone reservations — opting instead to only serve walk-in patrons — and will only be open for dinner Tuesday through Saturday.

The menu for Retro Ray’s looks very much like that of Ray’s the Steaks. In fact, it is the Ray’s the Steaks menu — from 2005. The offerings and the prices match that of the old 1725 Wilson Boulevard Ray’s the Steaks, circa 2005, we’re told. That means your average steak will be about $3 cheaper than the same steak next door.

Manager Jon Macy says the 50-seat Retro Ray’s is intended primarily to be overflow for the 180-seat Ray’s the Steaks, which is often fully booked with reservations. Ray’s the Steaks books so many phone reservations, in fact, that it takes two employees just to take reservations during the middle of the day, when the restaurant is otherwise closed.

Unlike the current Ray’s, Retro Ray’s has a liquor license and will serve higher-end liquors and cognacs. It will also serve wine, like its neighbor, but the wine list will be shorter and will include a $18-per-bottle house wine in addition to inexpensive by-the-glass options. Retro Ray’s has a small, simple bar with seating for about half a dozen.

Retro Ray’s quietly opened last Thursday and Macy says the eatery has already started attracting sizable dinnertime crowds. He estimated that the restaurant served 150 customers on Saturday of this past weekend. Ray’s the Steaks, meanwhile, will celebrate the 10th anniversary of its founding later this year.