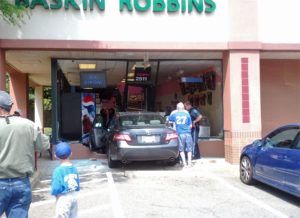 A car came crashing into the Baskin-Robbins ice cream store at 2511 N. Harrison Street in the Yorktown neighborhood this afternoon.

Just after 12:00 p.m. an elderly male driver in a Toyota Camry drove into the store’s entrance after accidentally pressing the gas instead of the brake, according to Arlington County Police spokesman Dustin Sternbeck. Two people were inside the vehicle at the time. No word on whether anybody was inside the store.

Damage to the store is estimated at $20,000, but a building inspector determined that there was no structural damage to the building.

No injuries were reported and no charges have been filed against the driver.