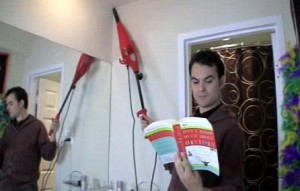 Remember Columbia Pike resident Jesse McLaughlin, the government security analyst who was named the 2011 Apartments.com Roommate of the Year?

Well, it seems that McLaughlin’s good luck in the roommate department didn’t end there. He recently proposed to his roommate — his girlfriend, Lisa — and the pair are now engaged.

McLaughlin said he spent the prize money ($10,000 plus free rent for a year) on an engagement ring.

“I was able to spring for a ring with the money I saved by winning the grand prize and not having to pay rent this past year,” McLaughlin said in a press release. “If there had been any question before, now I am definitely Roommate of the Year, at least in my fiancee’s eyes!”

Apartments.com is now seeking entries for its 2012 Roommate of the Year contest.