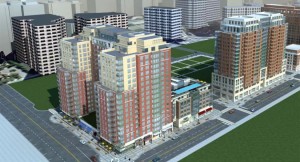 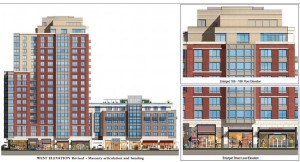 (Updated at 10:05 a.m.) After several years of delays, construction is finally about to get underway on the third phase of the Metropolitan Park development in Pentagon City.

Three Metropolitan Park will be an 18-story, 411-unit apartment building near the intersection of S. Fern Street and 12th Street S. It’s part of the same development that includes the luxury Millennium and the Gramercy apartment buildings, on the site of the former Cafritz warehouses across from the Costco parking lot on Fern Street.

County officials expect construction on Three Metropolitan Park to begin “very soon” and to take about three years to complete. 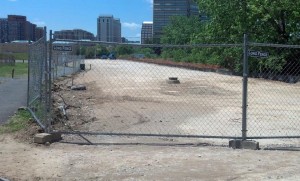 As part of the project, the developer — McLean-based Kettler — will be building an extension of 12th Street S. to connect S. Eads Street and S. Fern Street. While crews have already done what looks to be some preliminary grading for the street, the area is expected to be used as a construction staging area and parking lot until the completion of the project. After the project wraps up, perhaps by mid-2015, Kettler will build the road for public use.

Pedestrian access from S. Fern Street to S. Eads Street — a key cut-through for commuters heading to the Pentagon City Metro station — will be maintained during the course of the construction project, according to county officials. Kettler has said it will provide a new, lighted pedestrian path along the construction site prior to excavation work.