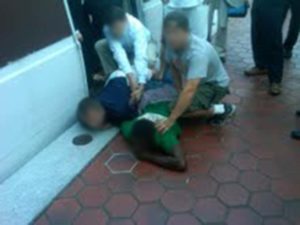 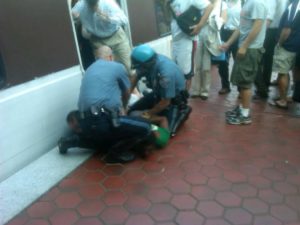 (Updated at 3:05 p.m.) A group of bystanders helped out a Metro rider last night (Tuesday) by tracking down and detaining three men who allegedly tried stealing a woman’s cell phone.

Springfield resident Jonathan Jackson says he was riding the Blue Line home around 7:00 p.m., when he noticed a man acting suspiciously. When the doors opened at Arlington Cemetery, the situation grew weirder.

“All of a sudden we saw this guy weaving in and out of the train cars,” Jackson said. “He ran into our car and then ran into the next car down.”

Just as the chimes were ringing for the doors to close, Jackson says a woman ran out of the train yelling that the man had stolen her phone. That’s when Jackson ran off the train and onto the platform trying to find the accused thief. He saw that farther down the platform, several people had tackled the man.

“At that point, I thought the best thing I can do is call the cops,” said Jackson.

Jackson called 911 while others detained the alleged thief.

“It really was a team effort, but nobody even knew each other,” said Jackson.

Jackson says for a while, two other men, who appeared to be the alleged thief’s friends, tried freeing him while he was being held on the ground. After a few minutes, however, they took off. Jackson believes bystanders followed the friends and pointed them out to police, because they were detained along with the accused thief.

Metro Transit Police were the arresting officers, and they were assisted by Arlington County Police. According to WMATA spokesman Dan Stessel, the accused thief is 17 -years-old, and has been charged with robbery. Police talked to the other two people who were detained because they matched witness descriptions, but both were released.

“We’ve had a few snatch robbery events this year where witnesses or victims chased after the criminal,” Stessel said. “But it’s not something we encourage because of the potential of injury. It’s always best to let the property go. This one has a happy ending, we’re certainly happy for that.”

Jackson believes the train driver must have seen what was going on, because he kept the doors open while bystanders ran down the platform to catch the alleged thief. The train reportedly ended up holding at the station for about 10 minutes, until police arrived and were able to make arrests.

Although he has heard of people having their electronic devices stolen on the Metro, Jackson said it was far different to witness it. While he obviously can’t say for certain, he said it didn’t seem like this was a one time incident.

“It seemed like it was pretty well coordinated,” Jackson said. “But they just didn’t anticipate a group of people stepping in.”

There are no reports of injuries from the incident.