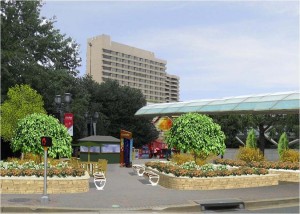 (Updated at 1:15 p.m.) Plans have been revealed for renovations to the Crystal City Metro station entrance, which are scheduled to begin next week.

Fox added that many people will benefit from the facelift, considering the Metro Gateway area receives even more foot traffic than the other areas — Southern Gateway and Northern Gateway (Long Bridge Park area) — that were recently renovated. An estimated 26,000 riders use that Metro station daily.

The Metro entrance will remain open throughout the renovating period, although at times pedestrians may have to take detours around some construction in the plaza. If everything goes well, the project should be completed by mid-October.