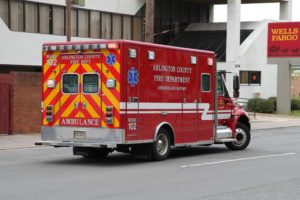 A 51-year-old Maryland man was found dead in the lobby restroom of a Crystal City hotel Monday morning.

The hotel’s cleaning staff discovered the man unresponsive in a bathroom stall around 9:00 a.m. on Monday (Sept. 17). He was sitting on a toilet, slumped against the back wall. Paramedics were called but they were unable to revive the man, according to Arlington County Police spokesman Dustin Sternbeck.

The man was a resident of Bowie, Md., according to police. It’s not clear whether he was a guest in the hotel.

Authorities believe the man had a heart attack while on the toilet. His death is not considered suspicious.