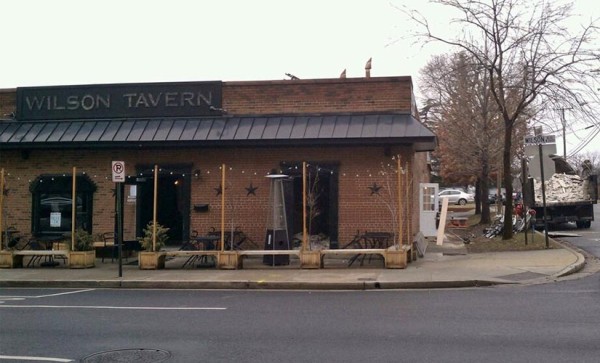 Wilson Tavern (2403 Wilson Blvd) is expanding. The Courthouse-area watering hole has closed temporarily as a result of the construction.

The restaurant is expanding about 35-40 feet — into an empty, adjacent space — and adding 20-25 seats as a result. The larger space will also allow Wilson Tavern to expand its food menu, according to owner Reese Gardner, who also owns The Mighty Pint and Irish Whiskey Public House in D.C.

Interior work is expected to wrap up tomorrow, and Gardner is hoping to reopen by 4:00 p.m., in time for the Clarendon/Courthouse Mardi Gras parade. Wilson Tavern is planning a Mardi Gras party tomorrow night, and a Valentine’s Day party on Thursday night.

When it first opened in 2011, replacing the former Kitty O’Shea’s, Wilson Tavern emphasized its chef-created food menu. Thanks in part to the small space and high overhead costs, the restaurant struggled to return a profit. Several months after it opened, Gardner bought Wilson Tavern from the original owner and in May 2012 relaunched it — without a chef — as a more alcohol-centric bar. Now, he says, the expansion is allowing him to invest more in food.

Wilson Tavern’s drink options will remain the same after the expansion. The bar has 10 beers on tap, including 5 Flying Dog drafts, and serves 16 ounce cocktails, which Gardner credits with helping him attract a younger, fun-loving demographic.