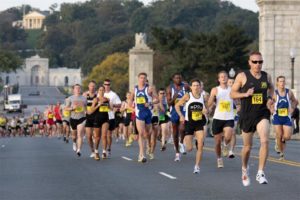 Update at 2:15 p.m. on October 17 — Because Congress came to an agreement last night that re-opened the government, both the Army Ten-Miler and the Marine Corps Marathon will proceed as originally planned.

The route of the Army 10-Miler race has been changed and the Marine Corps Marathon is in jeopardy due to the ongoing federal government shutdown, ARLnow.com has learned.

The 10-Miler, which is scheduled for Sunday, Oct. 20, starts and finishes near the Pentagon in Arlington. Originally slated to cross the Memorial Bridge into D.C., the course has been altered so that the race will cover more distance in Arlington, thus avoiding National Park Service territory impacted by the shutdown.

Shaunteh Kelly, media relations coordinator for the race, could not immediately confirm the route changes when reached by ARLnow.com. 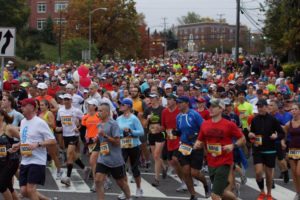 The situation is more dire for the Marine Corps Marathon, which is scheduled for Sunday, Oct. 27. The race may be postponed or canceled if Congress doesn’t act to reopen the government by the end of the week, we’re told exclusively.

“I don’t want to put people in panic mode, but if as of Friday evening the government is still closed, it’s probably not going to happen,” Lt. Green said of the race.

Green said police agencies are still “plowing ahead” on the assumption that the government shutdown will be lifted in time.

“As of right now all participating jurisdictions are moving forward as if it is going to take place,” he said.

Tami Faram, spokeswoman for the marathon, said that organizers were still planning for the race to go on. As reported by Runner’s World, Marine Corps Marathon staff is paid with non-appropriated funds, and thus not subject to furloughs.

“From our standpoint… we’re continuing to plan for Sunday, October 27,” said Faram.

“We’re waiting with everyone else,” she said of the shutdown. “We just don’t have a crystal ball.”

Faram would not confirm whether a cancellation or postponement is possible should the government remain shut down. She did note, however, that 60 percent of the race is run on National Park Service property.

According to Green, too much of the 26.2 mile race is on federal property to make changes in the route feasible. That includes the marathon’s iconic finish, at the Marine Corps War Memorial in Rosslyn.

The marathon has never been canceled in its 37 year history. The race was run last year despite Hurricane Sandy barreling down on the East Coast. The storm hit Washington after the race finished.

Should any changes be made regarding the race, Faram said, information will be posted on the Marine Corps Marathon website and Facebook page.

Update at 8:55 p.m. — The Marine Corps Marathon released a statement tonight via Facebook.

While still considering and exploring all possible options, the MCM has targeted this Saturday, October 19 as the date to officially notify runners of the status of the event. It is sincerely the hope of everyone associated with the organization of this event that MCM participants can run as planned.