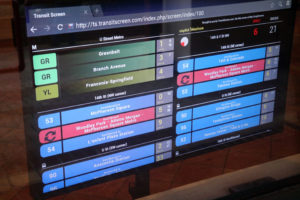 Not all tech startups are born in a garage, or in coffee shops, with idealistic expectations of disrupting an entire industry or changing the way people interact with each other.

One of Arlington’s more promising startups got its start under the wing of Mobility Lab, an Arlington County-funded transit research organization. TransitScreen began as a fellowship in the Mobility Lab with now-president Matt Caywood and a few colleagues trying to figure out a way to “make transit easier.”

They developed a monitor system that displays up-to-the-minute transit information for the area in which it is displayed. The display shows Metro and buses, but also information about Capital BikeShare stations, streetcars and other transportation options.

The fellowship lasted four months, during which much of TransitScreen was developed, but there was nowhere to go within the Mobility Lab after that.

“We did some interesting and great stuff there, but there wasn’t continuity,” Caywood said. “There was a weird interregnum after that was over because we needed to go commercial. The screens needed support.”

Caywood began to grow TransitScreen along with co-founder Ryan Croft. Initially, TransitScreen was started only in Arlington, then expanded to all of Washington, D.C. This month, TransitScreen installed its first screen in San Francisco — where Croft is currently located — and is in discussions for screens in New York, Boston, Chicago, Los Angeles, Portland, Ore., and Vancouver, Canada. 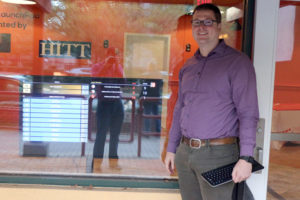 In June, TransitScreen was accepted into the Ballston Business Improvement District Launchpad competition, where it is an alternate in the semifinal stage. Caywood spoke to ARLnow.com from the Launchpad’s office in the old Chevy’s restaurant in Ballston, while Croft was on a conference call from his new home base in San Francisco.

Like most tech startups, TransitScreen was formed to solve a problem, Caywood says.

Caywood, Croft and their contracted designers and engineers designed a platform that could adapt to any metropolitan area with a multitude of transit options, but Caywood said the D.C. area was the perfect place to start the experiment.

“Places like Arlington and D.C. are ideal,” he said. “It’s a city that’s committed to transit-oriented development and a population that is open to trying new things. It helps if the decision-makers are familiar with transit. In D.C. and Arlington, everyone who makes the decisions also uses the transit system.”

The screens are designed right now to be an amenity for residential and commercial developments, although TransitScreen does have a partnership with the Columbia Pike Revitalization Organization. 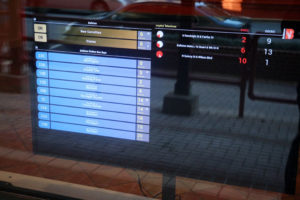 “You turn the screen on and it attracts a lot of attention,” Caywood said. When the screen at the Launchpad office is turned on, passers-by on the street frequently stop and look. “We want to create enough of a presence where people will rely on it for their transit needs.”

Caywood said in the D.C. area, a large percentage of travelers only ever consider Metrorail as an option, and one of his company’s challenges — and opportunities — is to convince travelers to use other options.

“Seventy percent of people use multimodal transportation, whether it’s Metro and bicycle, car and bus,” Caywood said. “But buses are very mysterious. People see them and don’t know where they go or where they come from. People need to be informed, and I think that’s where we’re going.”