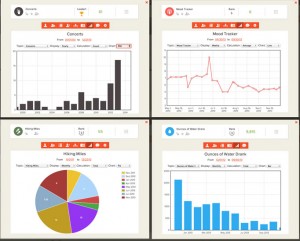 What would it look like if you could track your mood over the past year? What do you think you would see if every workout you’ve done were placed on a line graph? What if every beer you’ve drank were poured into a virtual swimming pool?

This is the concept behind Everylog, a “quantified self” web app founded by Joe Zaczyk. Users can log every aspect of their life and turn it into a data set, or compete against other users. The sound of tracking one’s every move may certainly not appeal to some, but Zaczyk says he doesn’t want those people to use Everylog.

“I know that it’s not for everyone,” Zaczyk says. “It’s for ‘Type A’ organized people. I want to cater to the people who need this. I want to help those people.”

A decade ago, Zacyck was working for Deloitte and felt out of place. A self-described “hippie” who “made my own clothes,” working for a giant corporation and following strict instructions didn’t feel right. Ten years ago, he joined up with CustomInk, a custom T-shirt company now based in McLean, as an accountant.

At the time, only about a dozen people worked at the startup, and the attitude around it — casual, loose and ambitious — spoke more to Zaczyk’s personality he said. Today, he’s CustomInk’s controller and the company is approaching 1,000 employees and $200 million in revenue and just took in a major round of investment from Ted Leonsis and former AOL CEO Steve Case.

“I was charged with a lot of responsibility and handling everything with the business,” he said. “It was fun building things the way I wanted to build it. It’s fun to be thrown into something and trying to figure it out.”

It was when Zaczyk went home for the holidays when the seed of the idea that would become Everylog was planted. His father puts a line of masking tape on everything, and writes down every time he uses it to gauge if it was worth the purchase. Zaczyk said that was when the lightbulb went off. 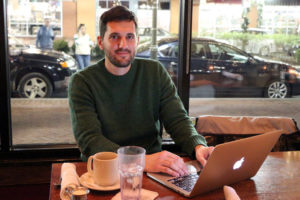 “I’ve always wanted to track and quantify all the things in my life,” he said. He went to Quantified Self conferences and discovered like-minded people and ideas, but nothing that touched on exactly what he wanted. “There’s a universe of people out there that want to do this.”

He incorporated Everylog in 2010 out of his apartment near Shirlington, but has run into several roadblocks. He hired a developer to help him build the initial product, but “had to fire him” eight months later, so the project sat on the shelf for a while. Eventually, he brought on a co-founder, Joey Merz, who helped him finish with the technology, but Merz left the company in May this year.

Outside of personnel, Zaczyk also made a decision with the business he now regrets: building a website — which went live in November 2012 — instead of a mobile app.

“In retrospect, we should have gone mobile first,” he said. “This needs to be mobile, but hindsight is 20/20.” 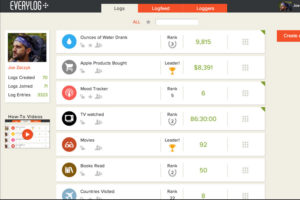 Zaczyk is working with partners building an iOS app now, which he plans on rolling out in early 2014. With 1,000 users logging manually online, the mobile app will make it more natural for people to log, Zaczyk said, and incorporate an innovation that he expects will launch Everylog into greater success: passive logging.

“Right now, our users have to go in and manually log everything,” he said. “With passive logging, the app would take in data from other apps, like Nike+, and log it for you.”

With more data comes more opportunity for “visualization,” Zaczyk said. That means the ability to see your life in infographic form presented in front of you. Zaczyk showed a chart of his moods, which picked up as the website was starting to see success in the spring, and dipped after Merz left the company this summer. Anyone can log anything, and any data can be presented this way.

Zaczyk has a few ideas to generate revenue, whether it’s selling traditional and/or highly targeted ads or hoping to sell to a bigger company, but that’s not what he’s targeting now. In fact, he’s not even looking to raise money.

“I met with a developer from Holland at a Quantified Self conference and he asked me how many millions of dollars I’m looking to raise,” Zaczyk said. “I just said I need $50,000 to $100,000 for marketing. I don’t want to raise money right now. At some point, I want to generate my own revenue. I can make it happen with a mobile app that kicks ass and getting the product out there.”