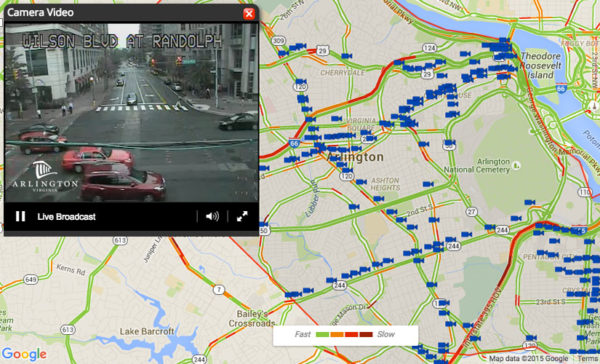 Arlington County is putting its 180 traffic cameras online for all to view.

A new website launched by the county allows anyone with an internet connection to view real-time video streams from cameras along main roads around Arlington.

“This new service is part of the County’s initiative to promote open data and better serve all those who use Arlington streets,” Arlington transportation chief Dennis Leach said in a press release. “We’re utilizing technology to provide the public with real-time traffic conditions so that they can make informed decisions about their planned trip – anything from a commute to a special event.”

The county says it is planning on adding VDOT highway cameras to its traffic camera page “in the future.” Currently, VDOT cameras can be viewed on the 511 Virginia Traffic Information website.

The new traffic camera system is not without its drawbacks: a sampling by ARLnow.com revealed that about 1 in 5 cameras was “temporarily unavailable,” and cameras are relatively sparse north of the Rosslyn-Ballston corridor.

In addition to now being accessible to curious residents, the cameras are used by transportation officials and public safety agencies to monitor traffic around the county.

“The Transportation, Engineering & Operations Bureau monitors traffic cameras to provide orderly movement of traffic and for incident management purposes,” the press release says. “These cameras are also shared with the Emergency Communications Center and the Arlington County Police Department.”

The cameras, however, are not in place to fight crime.

“Feeds are not continually monitored and the images shown are never recorded,” the county notes. “These cameras are not intended to be used as crime prevention or reporting tools.”

Arlington says it is continuing to upgrade and modernize its traffic infrastructure. From the press release:

For the last few years, the County has been upgrading the traffic signal communications network from copper cable to fiber. This state-of-the-art technology improves the reliability of our traffic cameras and provides higher-quality feeds. It also will help the County implement a Smart Traffic Signal System, which integrates real-time traffic monitoring with Variable Message Signs (VMS), blue tooth devices, video detections and traffic cameras. Upgrades will continue through spring of 2016.