A startup based in Ballston is growing fast thanks in part to the rising success of mobile news companies. 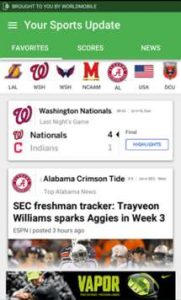 The startup, Mobile Posse, licenses content from a variety of websites like ESPN, the Associated Press and Mashable and packages it into an “aggregated content feed.”

Users can download the company’s app and configure their preferences to see the kind of stories they like. A typical user might sign up to see new sports scores, news, horoscopes, trivia, weather and other conent on their phone’s home screen.

“It is literally on the home screen of my device when I unlock it in the morning,” explained Mobile Posse CEO and founder Jon Jackson. “You can schedule pieces and components of it to be proactively delivered to you.”

The company plugs into ad networks and uses ad exchanges to monetize the service. Millions of people currently get updates from Mobile Posse, meaning lots of potential revenue, Jackson said.

Last year, Mobile Posse expanded its total revenue by about 77 percent, Jackson said. It’s also hiring at a quickening pace. Though the company only moved into its Ballston offices less than two years ago, it’s already looking for a newer, bigger space to hold all of its new employees.

And, if all goes according to plan, Mobile Posse will continue to grow rapidly in the year ahead.

“Twitter and Facebook and Google are really focusing on mobile. That helps a business like ours,” Jackson explained. “It really brings buyers. The amount of time spent on a phone has really taken off. We’re really a function of that. It’s where people’s eyeballs are.”