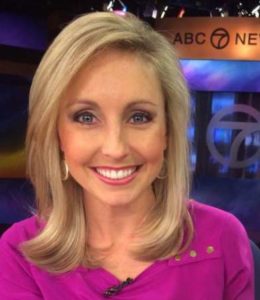 Autria Godfrey, a morning news anchor on WJLA (ABC 7), was charged with trespassing and being drunk in public last month in Clarendon.

“At approximately 12:45 AM on February 18, officers working a detail in Clarendon responded to the 1100 block of N. Highland Street for the report of a disturbance at a restaurant. The restaurant manager advised arriving officers that a female subject had allegedly started an altercation inside the establishment and they no longer wanted her on the property. Restaurant employees escorted the female subject off the property where she was advised by police that she would be arrested for trespassing if she returned that evening. The female subject left the immediate area with friends.

At approximately 1:24 AM, officers were advised that the female subject had returned to the property. Responding officers arrived on scene and observed the female subject inside the restaurant. Autria Godfrey, 33, was arrested and charged with trespassing and drunk in public.”

As reported by FTVLive, a TV news trade publication, Godfrey was suspended and taken off the air last week by station owner Sinclair. She was back on the air this week.

Godfrey was arraigned Feb. 24 and is due back in court on May 19.