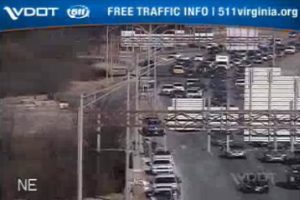 A driver, possibly suffering a medical episode, drove into trees along southbound I-395 just past the 14th Street Bridge today.

The crash happened around 12:30 p.m. in the area of Boundary Channel Drive. A 911 caller reported that the man was unconscious but breathing and that smoke was coming from the hood of his SUV.

Virginia State Police were the first on scene and were assisted by Arlington County officers in shutting down a highway ramp and several lanes during the emergency response. A number of witnesses appear to have pulled over to help before police arrived.

The man was transported by medics to George Washington University Hospital with what were reported to be minor injuries, according to scanner traffic. The closed lanes have since reopened.