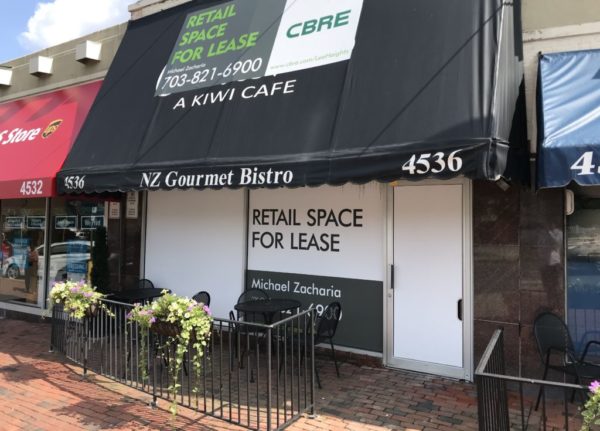 A group of restaurateurs known for their D.C. hotspots are planning to open a new eatery in Arlington.

Brothers Ian and Eric Hilton, along with Chef Brendan L’Etoile, are partnering to open Cafe Colline in the former Cassatt’s space at 4536 Lee Highway, in the Lee Heights Shops. Cassatt’s, a beloved but tiny New Zealand-themed restaurant, closed last summer shortly after being sold by its longtime owner.

He said the trio is “redecorating” the Cassatt’s space but largely keeping it as built and avoiding heavy construction. The cozy restaurant will include a dining room and a 12-seat bar.

The partners are hoping to open Cafe Colline at some point this fall.

The Hilton brothers have received national attention for their burgeoning D.C. restaurant empire — notable spots include Chez Billy Sud in Georgetown (where L’Etoile is executive chef), Brighton at the Wharf, and El Rey taqueria on U Street NW. But they announced plans to expand outside the District late last year.

“D.C. is so saturated,” Hilton told Washingtonian at the time. “Take a look around. I don’t know what’s left to do in D.C., quite frankly. I really don’t.”

Hilton — who lives in Arlington’s Donaldson Run neighborhood, five minutes from the future Cafe Colline — told ARLnow this is the most excited he’s been for a new restaurant in some time.

Update at 10:35 a.m. — Additional information about the new restaurant, from a PR rep:

Located at 4536 Lee Highway, Cafe Colline will take a few cues from its sister establishment Chez Billy Sud, the acclaimed Georgetown favorite known for its elevated-but-accessible French fare. The equally French-driven new menu at Cafe Colline will feature dishes like Provencal fish soup, pork rillette and steak frites, served all day, as well as a carefully curated wine list and weekend brunch. Under the direction of Chez Billy Sud Chef Brendan L’Etoile and his impeccable staff, Cafe Colline’s open concept kitchen will offer a unique vantage point ideal for everything from date night to after-work wine & bites. The 50-seat Cafe Colline will also feature outdoor seating, ample parking and reservations for dinner. Stay in the loop by following @CafeColline on Instagram.