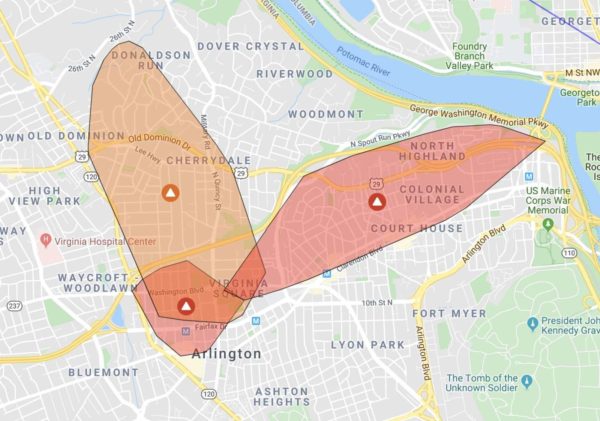 Update at 5:15 p.m. — Power has been restored to the Rosslyn-Ballston corridor, but another, separate outage has been reported near Wakefield High School.

Earlier: Nearly 9,000 Dominion customers in Arlington are without power this morning.

A widespread outage is affecting portions of Rosslyn, Courthouse, Clarendon, Virginia Square, Ballston and neighborhoods to the north, including Cherrydale and Donaldson Run.

As of 8:45 a.m. Dominion’s power outage map lists 8,844 customers without power and an estimated restoration time of 11 a.m.-2 p.m. There’s so far no word on what caused the outage.

Police are working to control traffic as some intersections with dark traffic signals, according to scanner traffic.

Update at 9:10 a.m. — The number of customers without power is down to around 3,800, with the outage now running from Virginia Square to Rosslyn, north of Clarendon Blvd, according to Dominion’s map.