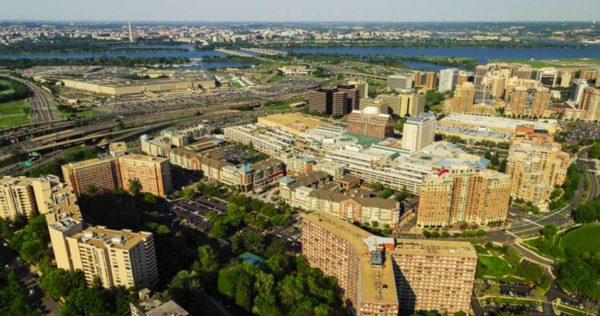 (Updated at 4:1o p.m.) Arlington County is launching a new planning study to determine how best to shape the new density coming to Pentagon City.

As nearby Crystal City and Potomac Yard undergo new development spurred by Amazon’s second headquarters, the new study is intended to shape development around Pentagon City, where the permanent HQ2 campus will be located.

“For over four decades, the Pentagon City Phased Development Site Plan (PDSP) has successfully guided growth in the area, resulting in a diverse mix of residential uses, hotels, offices, and retail,” the County’s website said. “Building upon this commitment to planned development around a Metro station, recent events have placed a greater focus on ensuring this approach continues into the future.” 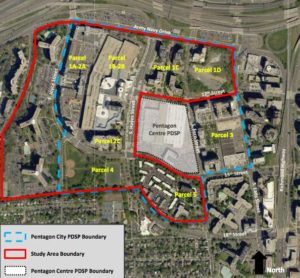 The 12-month planning process is broken into four phases, which will examine the existing conditions and look at varying scenarios for how to shape density could shape the area, “including urban design and streetscape elements, building heights, transportation infrastructure, and public realm recommendations.”

“Arlington County is initiating a new study to help guide future development for Pentagon City, with coordinated planning and transportation components,” the county’s website says. “The study will help define Pentagon City’s capacity for future growth by evaluating alternative redevelopment scenarios and their resulting impacts on the capacity of the existing, committed, and planned transportation system, infrastructure, public spaces and community facilities.”

An ongoing traffic analysis of the area started last year, examining bicycle and pedestrian traffic patterns in addition to car traffic. A preview of the plan in January put the total estimated cost of the study at $1.5 million, including the transportation analysis, staffing hours and consulting for the planning study.

A couple of major redevelopment proposals, including some 1,000 new housing units on the RiverHouse property and a new mixed-use development at the current TSA headquarters, are effectively on hold pending the outcome of the study.

The second phase of Amazon’s permanent HQ2 project — currently an vacant plot of land after a series of abandoned development proposals — is within the study boundaries. A major redevelopment of the Pentagon Centre shopping center — where Costco is located — is also planned but remains years away and outside the scope of the study.

The eventual goal, according to the study preview, will be the establishment of new urban design guidelines, implementation strategies, and guiding documents for Pentagon City.

“The study will last approximately 12 months, starting with a mid-2020 kick-off to mid-2021 completion,” the County said. “County Board briefings or a work session are anticipated to happen at the midway point.”