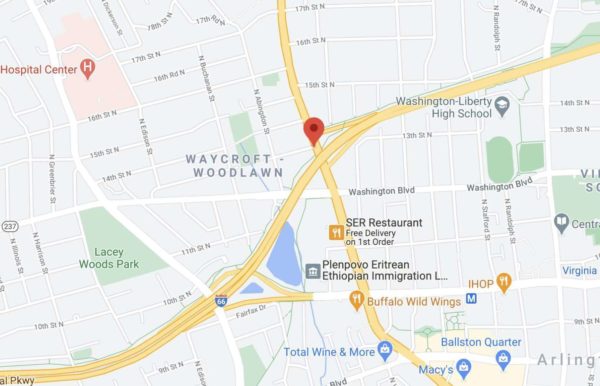 A local teen is in custody and two others are being sought by police after an alleged drug deal led to a serious assault.

The incident happened shortly after 11 p.m. last night in the Waycroft-Woodlawn neighborhood, near Ballston. Police say an arranged sale of narcotics ended with the victim being beaten with batons by several people.

The victim was hospitalized with serious but non-life-threatening injuries.

Police searched the area and arrested a 19-year-old suspect while he was walking along the nearby Custis Trail. Two other suspects have been identified and are expected to face charges, police said.

MALICIOUS WOUNDING BY MOB, 2020-12140181, 4600 block of 13th Street N. At approximately 11:17 p.m. on December 14, police were dispatched to the report of a fight in progress. Arriving officers located the victim, who had sustained serious injuries, and rendered aid prior to the arrival of medics. The victim was transported to an area hospital with serious, but non life threatening injuries. The investigation determined that the victim and three suspects met for the arranged sale of narcotics, and a physical altercation ensued between the parties. The suspects allegedly struck the victim multiple times with batons, causing lacerations. A bystander yelled at the involved parties, at which time, the suspects fled on foot. Officers canvasing the area located Suspect One walking on the Custis Trail, made contact with him, and took him into custody without incident. Anthony Silvers, 19, of Arlington, Va., was arrested and charged with Malicious Wounding by Mob. He was held on no bond. The other involved suspects were identified and charges are pending.

Also on Monday, a pair of suspects broke into, damaged and stole from four businesses in Clarendon and East Falls Church.