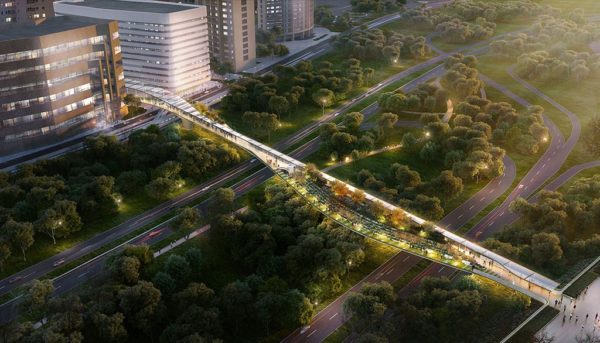 It’s an idea that’s still years away, but a new pedestrian bridge from Crystal City to National Airport is getting a bit closer to reality.

At its upcoming Saturday meeting, the County Board is set to take a significant step in the creation of the proposed “High Line”-like pedestrian path over the GW Parkway.

“The Board will consider approving a $4.23 million contract, awarded through a competitive bidding process, for the conceptual design and environmental review for a Crystal City-National Airport Multimodal Connector,” according to Arlington County, in a preview of the meeting’s agenda. “The connector would link Crystal City’s core and the airport, meeting the needs of pedestrians, bicyclists, and micro-mobility users of all ages and abilities.”

“Currently, pedestrians and bicyclists must navigate a circuitous network of trails and crossings to traverse the 2,000 feet from Crystal Drive to the airport terminals,” the County notes.

The cost of the design and review process will come out of $9.5 million in federal Congestion Mitigation and Air Quality Improvement funds already allocated by the Board. The process is expected to take several years.

From a staff report to the County Board:

This project is included in the adopted Fiscal Year 2019-2028 Capital Improvement Plan (CIP) under Transportation, Crystal City Streets. Funding for the project’s Conceptual Design and Environmental Planning/NEPA Documentation services will be provided entirely through $9.5 million Congestion Mitigation and Air Quality Improvement (CMAQ) provided by the Commonwealth of Virginia for this purpose. There is no local matching fund requirement for this federal funding. The duration of work performed under this contract will last approximately three to four years. The scope of work includes an optional task for the Consultant to advance the project’s conceptual design completed during the EIS to the Preliminary Engineering level and prepare the bidding documents to advertise the project using a Design-Build construction delivery methodology. The costs associated with the optional task are not included and will be negotiated later, if this task is needed.

The winning bidder for the project was Boston-based civil engineering firm Vanasse Hangen Brustlin. Staff noted that the company’s bid was largely in line with independent cost estimates.

The National Landing Business Improvement District, which has championed the “CC2DCA” project, even funding its own feasibility study, said in a statement today that it will help make the already transit-accessible neighborhood more connected.

“The National Landing BID’s CC2DCA feasibility study championed a bold concept and created a captivating vision for iconic infrastructure and next generation mobility, and we are thrilled that Arlington County is now considering this important next step towards making it a reality,” said Tracy Sayegh Gabriel, President and Executive Director of the National Landing BID.

“When completed, the CC2DCA Intermodal Connector will link a multitude of transportation assets with a safe and enjoyable 5-minute walk to the airport,” Gabriel added. “This pivotal addition to our existing network will position National Landing to continue to attract investment, spur economic growth and enhance the vitality of our growing urban center.”

The total project cost for the connector, including design and construction, was previously estimated at just over $36 million. The Northern Virginia Transportation Authority committed $18 million in regional transportation funding to the project last year.