Update on 9/30/21: Charges against Briscoe were dropped earlier this week.

Briscoe was in Arlington General District Court Wednesday afternoon for her arraignment. A judge also heard arguments about whether the 72-hour Emergency Protective Order issued early Monday morning by an Arlington magistrate should be extended.

During the hearing, the woman who asked for the protective order — Charlotte, an employee of  Celtic House Irish Pub on Columbia Pike — testified that she was “terrified” of Briscoe and her army of devoted social media followers.

Charlotte said Briscoe was a regular customer at Celtic House but things between her and the bartenders deteriorated over time. At one point, Charlotte testified, she and Briscoe encountered each other in Georgetown and Briscoe followed her, yelling “crazy bitch.”

In another incident, Charlotte testified that Briscoe had been drinking for ten hours straight when she took a brief video of her riding her bike near the bar and sent it in a group chat to other Columbia Pike restaurant employees — including employees of Rebellion on the Pike, another target of Briscoe’s ire — to warn them, given what she described as Briscoe’s erratic behavior.

Briscoe somehow obtained the message sent by Charlotte and has since been posting TikTok videos about it and her spat with the restaurant employees. The videos accuse Charlotte of “stalking” Briscoe and of revealing her location in the group chat, as well as using Briscoe’s credit card and ID in order to obtain her name and date of birth for the protective order.

In addition to allegations against Charlotte, Briscoe accuses a larger group of Celtic House and Rebellion employees of creating social media accounts and fake online dating profiles to “bully, stalk and harass” her. In her videos, she expresses concern about her safety and that of other women who patronize the bars.

The videos also infer that police are protecting the bars and Charlotte, who is reportedly dating an Arlington officer, given that a police report filed by Briscoe did not result in action against any of them. 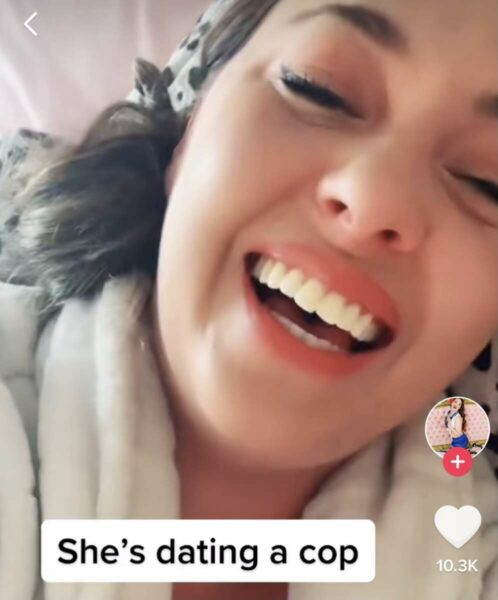 The videos have prompted many of Briscoe’s nearly 25,000 TikTok followers to come to her defense in social media comments, in negative online reviews of the restaurants, and via emails and phone calls.

“Be careful here, the bartenders like to share your location with a group of stalkers, get personal information off your credit card and share it with them. This happened to my friend,” wrote a woman named Nora from Utah. “When confronted the manager/owners did not investigate or fire the employee who was doing this.”

“Absolutely disgusting @ArlingtonVaPD for not protecting Coco after she filed a report with you,” an Arlington woman named Julie posted on Twitter. “And abusing your power to rush ridiculous restraining orders against her. Scary to thing as a woman in Arlington you are sh-t out of luck if your stalker has a friend that’s a cop.”

Charlotte testified that Celtic House has been getting “hundreds” of phone calls from angry followers of Briscoe, accusing Charlotte of things and calling her names.

A single mom, Charlotte said she has had to take unpaid leave from work, move away from her apartment, and bring her son to live with his father for fear of his safety.

An attorney for Briscoe briefly questioned Charlotte, who said she could have been more “tactful” with her message to the group.

Also testifying was an Arlington County police officer who served the protective order to Briscoe at her Columbia Pike apartment around 5:30 a.m. Monday.

“She informed us her intention was to violate the order and reference Charlotte on social media,” the officer said on the stand.

“I honestly can’t wait to be in handcuffs for making TikToks,” Briscoe said in a subsequent video. Another video shows the two officers serving the protective order. An arrest warrant was then issued and Briscoe was arrested around 7:30 a.m., according to a police spokeswoman.

In court, Briscoe declined to testify, citing her right to avoid self-incrimination.

While an attorney for Charlotte argued that the protective order should be extended given that Briscoe’s pattern of behavior did not change after it was issued, the judge ultimately ruled that Briscoe has not directly threatened Charlotte’s safety. There’s no evidence of actual or even a threat of violence, the judge said, denying the extension.

Briscoe and Charlotte were walked out of court separately, escorted by sheriff’s deputies. Charlotte, visibly upset and crying, declined to speak to reporters. An attorney for Briscoe said they did not want to speak with ARLnow because they believed our article about her arrest was “slander,” though they were planning to talk to a Washington Post reporter.

With the judge’s ruling, the protective order expired at midnight, allowing Briscoe to legally continue talking about Charlotte on her social media channels. In a video posted since the court hearing, Briscoe told her followers that she felt vindicated.

Briscoe, who was released from custody on her own recognizance after her arrest, is next due in court on Sept. 23 on the misdemeanor charge of violating a protective order. The charge carries a maximum sentence of one year in jail.

END_OF_DOCUMENT_TOKEN_TO_BE_REPLACED

More Stories
Morning Poll: Are You Taking a Vacation This Month?Arlington Olympian Torri Huske and Her Coaches Reflect on Tokyo Games