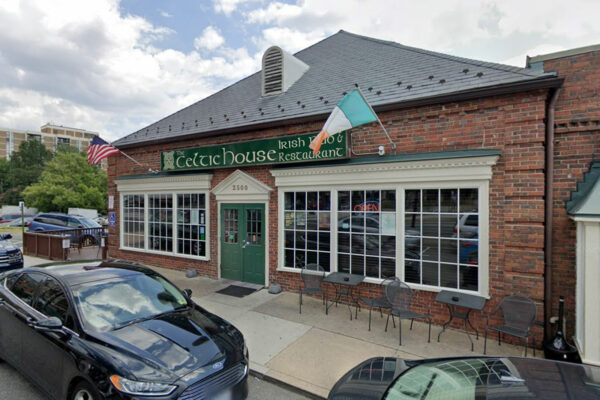 Update on 9/30/21: Charges against Briscoe were dropped earlier this week.

Earlier: Celtic House Irish Pub on Columbia Pike says it “does not wish to embroil itself” in the ongoing saga involving a local TikTok personality.

The bar released a statement on its social media channels yesterday, in response to allegations traded between TikToker Coco Briscoe, who attracted a sizable following with her videos about dating in the D.C. area, and a bartender the business now calls “a former employee.”

While the statement suggests that the bartender who Briscoe accuses of harassing her is no longer employed by Celtic House, it does not specify the circumstances around her departure. The bartender previously testified in court, during a hearing about an emergency protective order she obtained against Briscoe, about being “terrified” of the social media personality and her devoted followers.

The judge allowed the protective order to expire, suggesting that it should not have been issued by a county magistrate in the first place due to a lack of evidence of legitimate physical threats, but Briscoe is still facing a misdemeanor charge for allegedly violating it by continuing to post about the situation on TikTok. She is next due in Arlington General District Court in two weeks, on Sept. 23.

Briscoe says the bartender is among a group of people, including employees of two Columbia Pike bars, who “bully, stalk and harass” her, making her feel unsafe in her neighborhood.

The Celtic House statement references at least some of Briscoe’s specific claims, which she has repeated in many of her dozens of TikTok posts over the past month — namely that video taken of Briscoe riding her bike near one of the bars, along with derogatory comments about her, were shared in a group chat.

“It would be improper to further comment… or to engage persons who have attacked the Celtic House, or the reputation of its owners and staff,” the statement says, before adding: “To be clear, the Celtic House does not condone the filming of any patron by employees, nor the public dissemination of pictures or comments on the actions of its patrons, except where such matters are required by, or, in furtherance of some interest of law enforcement or required as part of a civil or investigative action.”

The bartender in turn testified in court that it is Briscoe who has been the aggressor, weaponizing her following to harass her and others via hundreds of phone calls, social media messages and online reviews. The video sent to the group chat, which Briscoe subsequently obtained, was intended as a warning to local restaurant employees about an erratic customer, the bartender said.

Briscoe, meanwhile, has continued to rail against the two bars — Celtic House and Rebellion on the Pike — and their employees in videos posted since her last court appearance. She has also levied various accusations against the Arlington County Police Department, ARLnow, the Washington Post, and online review site Yelp.

Celtic House, in its statement, asserted that its business has been unfairly targeted. The bar “does not tolerate, nor wish to participate in on-line posturing or bullying,” it said.

Celtic House’s owner has not responded to emailed requests for further comment.

A statement issued by Rebellion on the Pike last month insisted that the accusations against it were an “attempt to smear our business [that] has zero evidence and truth to it.”

The full statement from Celtic House is below.

During recent weeks, the Celtic House has been the target of an on-line campaign from a person who is involved in a dispute with a former employee. The Celtic House does not wish to embroil itself in such a dispute and defers to the Arlington Court system to address the issues concerning the interaction of the patron and former employee. We take no position on the actions of the patron, other than to deny many of the personalized allegations now being broadcast. We recognize, that in the time of the internet, it is rather easy to post personalized attacks and one-sided claims against people and businesses and while we fully support the rights of our patrons and competitors to present their opinions, we do take exception to many of the false statements that appear designed to interfere with our trade and business, rather than present a factual and legitimate viewpoint.

It would be improper to further comment on those matters or to engage persons who have attacked the Celtic House, or the reputation of its owners and staff. Suffice to say that the Celtic House attempts to present a warm, welcoming environment for its patrons. To be clear, the Celtic House does not condone the filming of any patron by employees, nor the public dissemination of pictures or comments on the actions of its patrons, except where such matters are required by, or, in furtherance of some interest of law enforcement or required as part of a civil or investigative action. The Celtic House, as a concerned citizen of the Arlington, Virginia community, will fully cooperate with law enforcement and the Courts, where the conduct of a patron implicates criminal or dangerous behavior.

In furtherance of the objective of providing a safe, convivial environment for those who frequent our establishment, the Celtic House also will not tolerate disruptive, abusive behavior. Where, in the discretion of Celtic House management, a patron is abusive of staff or other patrons, appears intoxicated, or is a threat to the safety of either themselves or others, the Celtic House reserves the right to take appropriate action, including asking a patron to leave, banning a patron or, in appropriate circumstances contacting law enforcement. This is necessary to ensure that all persons have the safe, cordial experience that we pride ourselves on providing.

The Celtic House also does not tolerate, nor wish to participate in on-line posturing or bullying. It does not seek to damage the reputation of persons or entities, does not attempt to spread falsehoods and is not intent on punishing others or interfering with their profession, trade or business. We maintain, as we always have, a strong commitment to civility, community and high-quality service.

We extend a commitment and a promise to our patrons to continue to provide high quality service and a welcoming atmosphere.

Read more →
More Stories
Runners Rejoice! Registration Is Open for the PNC Parkway Classic Road Race on Nov. 7How Arlington Will Mark the 20th Anniversary of 9/11 This Weekend