Search Results for "Ashlawn use permit" 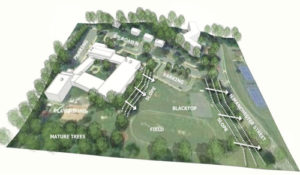 Arlington Public Schools has almost doubled its estimate for how many trees need to be removed to make way for the 12-room addition at Ashlawn Elementary School.

The initial use permit for the addition called for 54 trees to be removed to make room the expansion. After consulting a certified arborist, Arlington Public Schools staff is asking the County Board to approve the removal of 40 additional trees.

Once construction is complete, APS is suggesting planting 224 new trees, up from the 127 that was approved by the County Board last May. The increase is to comply with county policy on replacing trees that are removed for construction, Assistant Superintendent for Facilities and Operations John Chadwick told ARLnow.com.

“We’re adding more trees than required in order to be good neighbors and help to screen our property from our neighbors,” Chadwick said.

The revision is necessary because the original use permit was approved before the construction designs were finalized. APS and county staff agreed more trees needed to be removed to make room for stormwater construction, Chadwick said, and the arborist recommended dead and dying trees for removal.

The tree removal at Ashlawn generated some local outrage when the school system started removing trees not included in the use permit. That led to a verbal reprimand from the County Board in January.

“We cannot let this happen again — we cannot allow trees to be chopped down… this is a problem,” board member Walter Tejada said at the time, according to the Sun Gazette.

The use permit amendment that’s being considered on Saturday only addresses the trees, Chadwick said. The “loop road” dropoff from N. Manchester Street, which had been a source of controversy last spring, is not being recommended for change.

The School Board unanimously adopted “Variation B” of Superintendent Dr. Patrick Murphy’s recommended boundaries (left). The new boundaries will help distribute students to a new elementary school on the Williamsburg Middle School campus (see below) as well as to additions at Ashlawn and McKinley elementary schools.

The new schools and additions (there will also be a new choice elementary school near Kenmore Middle School and an addition to Arlington Traditional School) are being undertaken to provide an additional 1,875 seats of capacity by 2017 for Arlington burgeoning student population.

“Variation B” will shift elementary school boundaries and result in the reassignment of 900 students. The changes will take effect for the 2015-2016 school year.

The School Board also approved the following grandfathering provisions:

The School Board also directed Dr. Murphy “to recommend whether rising K-4 students residing in planning units reassigned to existing schools will be eligible to enroll in their newly assigned elementary school prior to School Year 2015 if seating space is available.”

On Saturday, the County Board will consider a use permit for a 26,160 square foot addition to Ashlawn Elementary School.

Construction on the addition is expected to begin this summer and wrap up by the summer of 2014. It will add 12 rooms, including 9 classrooms, at a cost of about $12 million, according to a project web page.

County staff is recommending approval of the use permit, as well as a use permit for temporary construction parking at the adjacent Dominion Hills pool.

Meanwhile, at its Thursday meeting, the School Board unanimously approved a schematic design for the new elementary school on the Williamsburg Middle School campus.

The new school will cost just over $43 million, according to an APS press release, with construction slated to start in January 2014 and wrap up in time for the start of the school year in the summer of 2015.

Peter’s Take is a biweekly opinion column. The views expressed are solely the author’s.

For years, County Board members have talked green about Arlington’s environmental problems.

But when it comes time to act green, they hide behind the Dillon Rule, claiming Arlington can’t enact stronger environmental protections without new state legislation.

Their claims are environmentally insensitive and legally incorrect. Last July’s catastrophic flooding underscores the urgency of addressing these environmental threats.

Arlington must begin using legal powers it already has to

Arlington should exercise these powers it already possesses:

Adopt a countywide stormwater utility fee (as Albemarle County already has). Stormwater utility fees are charged based on a property’s percentage of impervious surface cover, placing a greater burden on those who generate more runoff. See here and here. This fee should be enacted in addition to Arlington’s current service-district method to incentivize landowners to keep space open and green or to restore land to natural condition.

Enact a tree preservation ordinance to conserve trees during development based on Arlington’s status as an EPA-designated ozone nonattainment area. See here. Fairfax (also a nonattainment area) has such an ordinance. Passage in Arlington may help preserve trees located outside Chesapeake Bay resource protection areas (RPAs) — particularly if changes to current zoning would result in lower tree cover.

Enforce permit requirements on public sites. Arlington must stop giving itself and APS free passes when permit requirements are violated. When APS cut more trees than permitted on the Ashlawn Elementary School site, the County Board simply changed the permit terms instead of imposing penalties.

Stop relying on Chesapeake Bay Preservation Act loopholes for RPAs on public land. Projects at just 9 publicly owned sites accounted for the loss of 979 trees between 2014 and 2018.

Adopt a use-value assessment program (as Alexandria, Fairfax, Loudoun and others have) to reward property owners for keeping 5+ acre tracts of land open and undeveloped. Details here. While opportunities to take advantage of such a provision in land-constrained Arlington are quite limited, some of the pool clubs and other recreation associations might have sufficient land as does the Febrey-Lothrop House at Wilson and McKinley.

END_OF_DOCUMENT_TOKEN_TO_BE_REPLACED

In the other story, Arlington Sun-Gazette reporter and editor Scott McCaffrey noted:

“Arlington County Board members on July 14 took significant flak — yet again — from tree-preservation advocates. And as has been the case in the past, the board’s collective response has been: Don’t blame us; we don’t make the rules.”

Here are just a few of many examples:

The County Board should embrace publicly this comment (by Gavrilo2014) to last week’s Salt Dome column:

“Healthy mature trees should not be destroyed unless there’s absolutely no alternative.”

Arlington County government can make the rules to save mature trees.

Lots more mature trees could be saved if Arlington County only would exercise the powers it already has.

The County Board should instruct the manager to ask this question: have I saved a tree today? 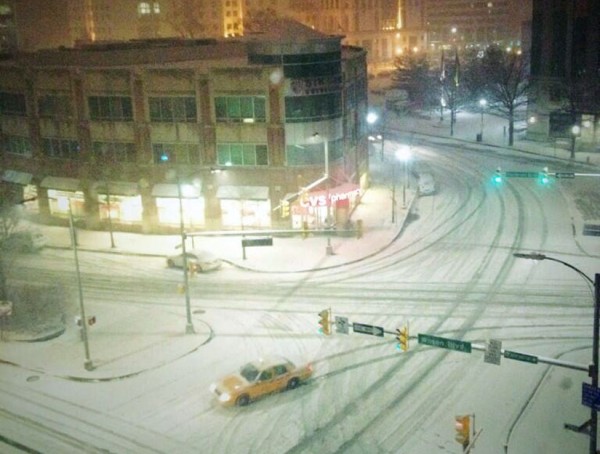 County Board Approves Ashlawn Addition Revision — The Arlington County Board on Saturday approved a revised plan for an addition to Ashlawn Elementary School but not before making Arlington Public Schools officials explain how the project went wrong. Local residents have complained about several aspects of the plan, including tree removal the building of a parking lot. [InsideNoVa]

‘Intersection of Doom’ Left Out of Rosslyn Planning — A draft Rosslyn sector plan framework doesn’t include any solutions for the so-called “intersection of doom” — the intersection of N. Lynn Street and Lee Highway that has been the site of numerous pedestrian and bicyclist vs. vehicle accidents. Some believe a pedestrian tunnel or bridge may be the best solution for the busy intersection. [Greater Greater Washington]

County Board Approves New Synthetic Field Surface — The Arlington County Board on Saturday approved up to $701,000 to replace a 10-year-old synthetic turf field at Wakefield High School. [Sun Gazette]

County staff members are recommending adding amendments to the Arlington County Zoning Ordinance that would affect parking at public pools and at elementary and middle schools.

At its meeting on Saturday (January 26), the County Board is being asked to provide authorization for staff to advertise public hearings regarding the proposed amendments. The changes include revising parking standards for elementary and middle schools, permitting off-site vehicle parking at community swimming pools and allowing the County Board to modify parking standards.

The issue first arose during the public review process for the addition to Ashlawn Elementary School and the new school to be built on the Williamsburg campus. Arlington Public Schools felt that using the existing Zoning Ordinance for parking requirements would result in an excessive amount of parking. For instance, the addition to Ashlawn would require 228 parking spaces under the ordinance, when APS says it only needs about 100.

“That is way more than we need and it means we would lose open space and ball fields,” said John Chadwick, Director of Design and Construction for APS. “If we do that and we lose open space, ball fields and green space, that sort of counters what everyone is trying to do in Arlington.”

Another concern is that the ordinance requires all of the parking spaces to be on site. One of the proposed amendments would allow for off-site parking on the street or in other lots, like the lots of private swimming pools, which are typically open during the summer but closed during most of the school year. County staff offered the example of Ashlawn’s ongoing shared parking agreement with the Dominion Hills Pool.

Residents who live close to the affected schools haven’t all been supportive of the measure considering it would force more cars into neighborhood streets.

“We are having some push back from neighbors, but very few of our schools provide the number of spaces currently required under this ordinance,” Chadwick said.

The ordinance is not retroactive, so schools already in existence would not have to suddenly rework their parking situation; only new schools, such as at Williamsburg, or school expansions, such as Ashlawn, need to comply.

The changes would also alter the definition of “design capacity.” The new parking proposal suggests allotting one teacher parking spot for every 7.5 students, and one visitor spot for every 40 students.

“We’re very much in favor of the plan and the change and we’ve worked with them [the county] all the way. We really need to get this change approved so we can move forward with the Ashlawn campus and Williamsburg site,” Chadwick said. “This is all good from our point of view. I know it’s a bit complicated, but it actually makes sense.”

Similar parking issues have been identified with the county’s planned aquatics facility at Long Bridge Park. That prompted County Manager Barbara Donnellan to ask staff to examine not only regulations covering school parking, but county recreational facilities as well. As with the schools, parking demand at the aquatics center site was deemed lower than the existing requirements in the Zoning Ordinance.

While some of the amendments deal specifically with parking either at schools or recreational facilities, there are also general provisions covering both categories. County staff recommends that one of the general principles should be to base parking requirements on average daily use and not peak facility uses. Additionally, it recommends sites be examined individually to determine parking needs instead of forcing all facilities to conform to the same regulations. Such a recommendation would be fulfilled by the proposed amendment allowing the County Board to grant special parking exceptions, which it currently cannot do.