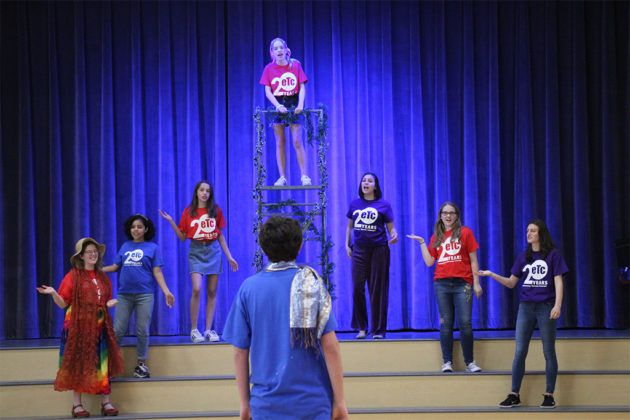 This Community Post was written by Educational Theatre Company and underwritten by Washington Workplace.

For the past 20 years, the Educational Theatre Company (ETC) has maintained a mission to facilitate transformation through the arts by offering year-round programming to ages 3 to 103.

ETC’s longest running summer camp is the Shakespeare Summer Classic Camp, where students from ages eight to eighteen jump into one of Shakespeare’s plays for a three week intensive — developing language, performance and directing skills. Summer Classic is structured to create a performing ensemble of all the campers as well as give the teen campers an opportunity to direct in addition to acting.

Each teen works with a fellow teen camper to stage and direct a full scene of the play using the younger campers as actors. The teens gain valuable leadership skills by playing the part of actor and director. Inclusion of the younger campers challenges teen and youth to work together to achieve an end goal where each camper’s contributions are essential.

ETC has seen many campers return from summer to summer, growing from young actors to experienced directors capable of using Shakespeare’s language, allowing them to create their own vision of his plays as they direct the next generation of creators.

This year, Shakespeare Camp will be presenting A Comedy of Errors in its 20th year at Nottingham Elementary (5900 Little Falls Road) on July 12 at 5:30 p.m. For more information on ETC programming, visit our website at www.educationaltheatrecompany.org.

Next
Free Divorce Workshop to Educate You About the Divorce Process