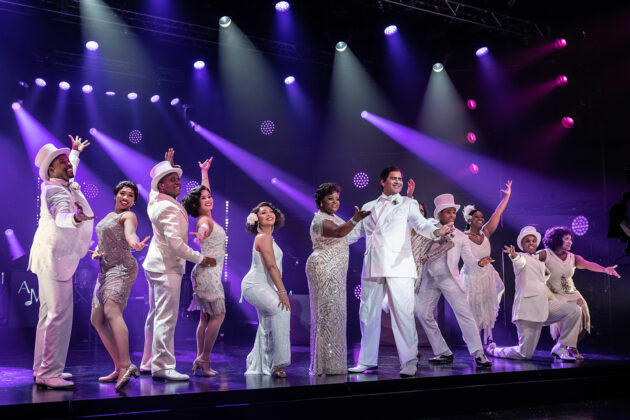 The professionally filmed exhilarating song and dance extravaganza is set to the swinging sounds of Duke Ellington, Jimmy McHugh, Dorothy Fields, Harold Arlen and more and framed by the poems of Langston Hughes.

In addition to Christopher Jackson, After Midnight stars Helen Hayes Award Winner Nova Y. Payton (Signature’s Ain’t Misbehavin’ and Shakespeare Theatre’s The Amen Corner) and a cast of the D.C. area’s finest actors and dancers with a band of seven. Featuring 28 of the big band era’s most memorable songs including “Stormy Weather,” “I’ve Got the World on a String,” “On the Sunny Side of the Street,” and “It Don’t Mean a Thing,” this non-stop revue showcases the gorgeous glamour and sophisticated syncopation of the Harlem heartbeat after midnight.

The New York Times said, “Tap-crazy? You’ll be in seventh heaven at After Midnight… the music gleams, shimmers, dances and sings with an eloquence that enthralls.”

This sultry summer treat can be enjoyed from anywhere and streams only until August 4 for only $35 per household.

Purchase and learn more at SigTheatre.org.

Streaming provided by Broadway on Demand.

Photo of the cast of After Midnight by Christopher Mueller.