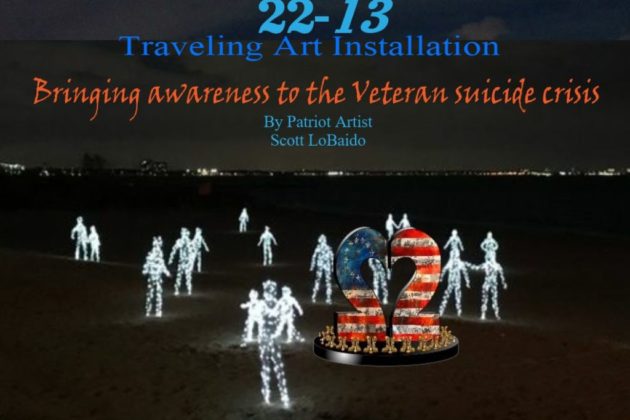 Scott LoBaido, 53, from Staten Island, NY is an artist who has devoted much of his time to creating patriotic works of art all around the country. Much of his work has been dedicated to honoring veterans for their service and sacrifice.

Just a few years ago, he chose Arlington American Legion Post 139 as one of the locations for his flag murals in his “Painting Flags Across America” 50 state tour. LoBaido began his tour with Post 202 in Fayetteville, February 2015 and completed his 49th flag at Post 139 in August 2015. Now he is honoring the Post again by including it in his newest tour, the “22-13 Exhibit.”

His fourth tour since 2006 begins in March and will include travels to sites in each of the original 13 colonies in an effort to raise awareness of the issue of veteran suicide. A study by the Department of Veterans Affairs indicates that every day 20 to 22 veterans take their lives due to the effects of post-traumatic stress disorder and other combat related issues.

Having grown up in a patriotic family where his grandmother flew the flag every day, LoBaido decided to use his art to bring the same spirit of patriotism to others. He has been busy painting flags on schools, police stations and fire houses and has always devoted his efforts to bringing recognition to the veterans and service providers who keep us all safe.

The lighted exhibit includes 22 figures of service members, which represents the number of daily average suicides. It also includes the number 22, with the first 2 reversed to depict a heart, surrounded by 22 pairs of boots.

You can view the exhibit on the evenings of March 19-20 at Post 139 on Washington Boulevard in Arlington. When the sun sets and the exhibition lights up, you will get the full effect of this very moving exhibit and feel the full impact of the sacrifice made by our veterans.

To view details of this project and donate go to scottlobaido.com and click on support.