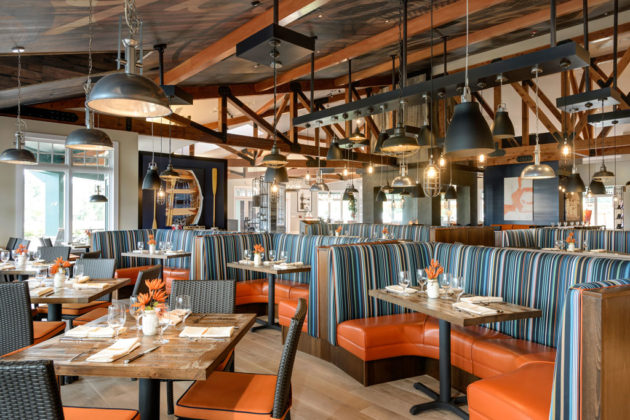 “We try to stay as close to the ground as we can,” said Executive Chef Scott Bilstad. “It makes sense if you are looking for fresh produce to keep a careful watch on what is in season. As an added benefit, it allows us to change up the menu regularly with new dishes using in-season ingredients.”

Executive Chef Scott Bilstad said the new offerings are part of a commitment to reflecting the history and culture of the Shenandoah Valley while focusing on the freshest possible ingredients within a 117-mile radius, after which the restaurant is named for.

This fall, the menu includes a cranberry and walnut chicken salad sandwich made with cornbread jalapeno toast, lettuce and tomato; and a local veggie pita pocket with pimento cheese, lettuce, tomatoes, cucumbers and Portobello mushrooms. Other new menu items include a wild arugula salad with beets.

Located at Trilogy® at Lake Frederick, an exclusive and upscale 55+ lifestyle resort community, the restaurant has views of the picturesque 117-acre Lake Frederick and the surrounding Shenandoah Valley, with seating on an outdoor veranda.

Its menu also includes fruits, vegetables and meats from Virginia farmers as well as a selection of white and red wines from wineries ranging from Front Royal to Charlottesville. Some ingredients also come from a small chef’s garden on site.

“Too much of modern cooking has become separated entirely from the farmers and producers who brought us the ingredients,” added Bilstad. “Our goal is to restore more of that connection for our customers, and seasonal menus are a big part of that.”