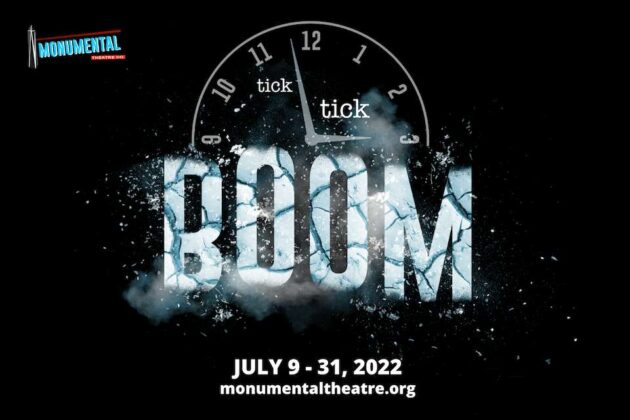 Monumental Theatre Company will return to in-person performance this July with Jonathan Larson’s tick, tick… BOOM!. The story follows an aspiring composer, Jon, in New York City in 1990 who worries he made the wrong career choice as he approaches his 30th birthday. The semi-autobiographical musical is an homage to the making of musical theatre, the reasons artists choose this life, and an admission of why we almost give up.

Many will recognize the production from the recent Netflix adaptation starring Andrew Garfield. The movie earned two Academy Award nominations among other accolades. The production includes popular songs, “30/90,” “Come to Your Senses,” and “Louder Than Words.”

Set in the intimate black box theatre of the Ainslie Arts Center on the campus of Episcopal High School, patrons will serve as confidants for Jon while he deals with the stresses and anxieties of his quickly approaching milestone birthday. tick, tick… BOOM! explores perseverance in the midst of a crossroads, something I think we’ve all dealt with in the past two years. “We’re excited to share our unique Monumental take on this incredible show,” said Director and Monumental Co-Artistic Director Michael Windsor.