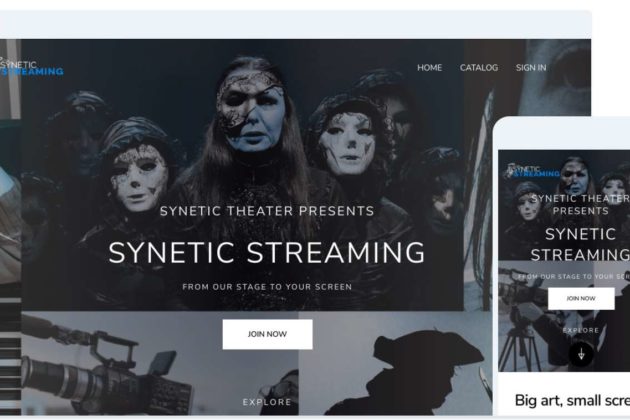 (This community post was written by Synetic Theater and underwritten by Embracing Arlington Arts.)

After moving productions online over the past year, Synetic co-founders Paata and Irina Tsikurishvili seized the opportunity to realize their long-held vision of producing films in addition to live theater. The Tsikurishvilis and many of the Synetic Company Members have trained in film programs around the world, worked across disciplines and have even incorporated cinematic elements into live shows, leaving the company uniquely positioned to share their innovative work with a wider audience through the development of a streaming app and new film production arm, Synetic Motion Pictures.

Synetic Streaming has monthly and yearly subscriptions and offers a la carte rentals. More content is scheduled for release in multiple bundles throughout the year. The content library currently includes archived theatrical productions, like Synetic’s 2020 adaptation of Phantom of the Opera starring Synetic co-Founder Irina Tsikurishvili as a female Phantom, and 2017’s family-friendly hit The Adventures of Peter Pan. The first volume of Synetic Streaming also includes Synetic Motion Pictures’ inaugural film All the World’s A Stage from long-time Synetic Company Member Scott Brown, as well as the premiere presentation of Orpheia from Company Member Ben Cunis starring Company Members Dan Istrate and Francesca Jandasek. Now sit back, relax, and enjoy from the comfort of your home!