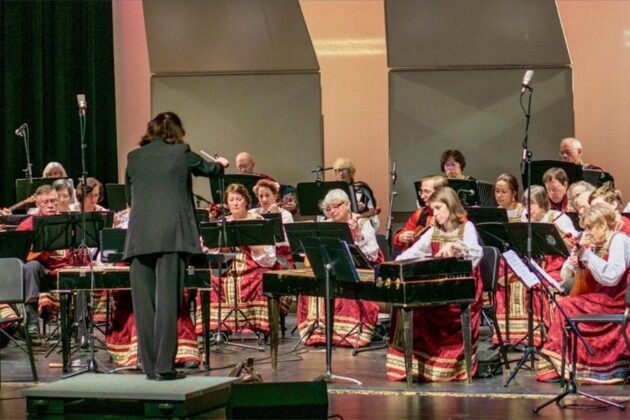 (This Community Post was written by the Washington Balalaika Society and underwritten by Embracing Arlington Arts.)

The Washington Balalaika Society Orchestra is highlighting the theme of winter in this year’s fall concerts. WBS Artistic Director Svetlana Nikonova will conduct her arrangements of classical and folk favorites, including selections from Tchaikovsky’s “Nutcracker Suite.” We are excited to be playing our Virginia concert at the new, state-of-the-art Capital One Hall in Tysons, Virginia. The concerts will be at 8 p.m. on Saturday, November 20 at the F. Scott Fitzgerald Theater in Rockville, Maryland; and at 3 p.m. on Sunday, November 21 at Capital One Hall, Tysons, Virginia. Ticket prices are: Adults $30; Seniors/Military $25; Students $15; children 12 and under $5. Concert tickets can be purchased online at  https://www.balalaika.org/.

We are thrilled to introduce balalaika virtuoso Elina Karokhina to our Washington-area audience. She will perform several solos with the orchestra. A graduate of the Rimsky-Korsakov Conservatory in Saint Petersburg, Russia, Elina is the musical director and soloist of the “Barynya” ensemble based in New York. WBS’ own domra virtuoso Peter Omelchenko also will dazzle you with his solos.

The Washington Balalaika Society is a community orchestra of over 50 musicians performing the music of Russia, Ukraine and East European countries on traditional instruments and in traditional costumes in the Greater Washington, D.C., area for over 30 years.