Have you ever wondered if owning a multi-unit property is worth it? Are you ready to take the next steps in your rental property investments? Join us for the second installment in our rental property investment series. We’ll guide you through the process of when and how to start managing your multi-unit property so that you can see first-hand how it impacts your bottom line. We will discuss what strategies work, what doesn’t work and how you can leverage a better return on investment for your business.

Danny hosts the Grant & Danny Show afternoons on 106.7 The Fan in Washington, D.C. As a comic, he has performed all over North America at clubs like Caroline’s on Broadway and Funnybone comedy clubs, toured Canada’s most successful chain of comedy venues, and participated in festivals in Boston, D.C., Detroit, Seattle and a bunch more stuff that’s totally impressive. Danny was also the studio comic for the Tyra Banks Show in New York.

Mike is comic, actor, writer, civil disobedient who travels the world making sardonic observations that often weave their way into his comedy. He is willing to expose and mock hypocrites…including himself. Mike is host of the longest running monthly comedy show in Baltimore (Second Saturday Shi* Show at the Ottobar, and is founder and director of the Ellicot Silly Comedy Festival). He has opened for John Witherspoon, Doug Stanhope, J.B. Smoove, Alonzo Bodden, and Steve Hofstetter.

Gigi has performed on the First Nation’s Comedy Experience on Amazon Prime. She has hosted at the D.C. Improv, and performs all over the DMV-area.

Amir has been producing and hosting stand-up comedy shows in the DMV since 2017. Born in the 80’s in South Baltimore, Maryland, his humor ranges from clever one-liners and puns to what it was like growing up, and the general absurdity that is life. You can’t help but find him lovable and a little goofy. He has opened for Tony Woods, Dante Chang, Dustin Diamond, and Kevin Farley.

Every show features local or nationally touring headliners and feature acts. For more info on future Belly Laughs shows: www.bellylaughscomedy.com. Give us a follow on Instagram @bellylaughscomedy and Twitter @bellycomedy.

The National Capital Bank of Washington

Dead Horse Comedy Productions is bringing together some of the DMV’s top comedians for a live comedy show!

Schewitz Whichard (pronounced SHEV-its WI-cerd):
Schewitz, from Alexandria, VA, whose comedy is as unique as his name. A veteran traveling comedian, whose quick wit, interactive and engaging style, makes the audience feel as though every show is tailor-made for them. Schewitz has appeared on Wild Out Wednesdays, with Roland Martin. He is a father to five daughters, which in itself is a continuous line of comedy. If you’re looking for a host, someone for a wedding toast or a comedy roast, this guy’s savvy style and effortless deliveries are always on-time. He will have the audience in the moment, with his one-liners and funny stories. Schewitz is one of the most requested comedians that you don’t know, but be assured after experiencing one of his shows, you will never forget his name. Buckle your seat belt and enjoy the ride.

Dee Ahmed:
Dee is a stand-up comedian from Washington, D.C. Dee, a natural goofball, has molded a unique comedic voice that is insightful, personal, and hilarious. He has quickly become a regular at shows all over the D.C.-area, from open mics in dive bars to comedy festivals around the country.

Ivi Demi:
Ivi is a D.C.-based comic originally from Albania. He was voted the Best House Comic at the Laugh Index Theatre in DC for 2020 and 2021. He has performed at the DC Improv, the New York Underground Comedy Festival, and the Burbank Comedy Festival, where he was selected to the Best of the Fest for 2021. You can see him working with the Kinda Live Comedy, Capital Laughs, and Don’t Tell Comedy teams across D.C. and producing shows out of his own living room as part of House Rules Comedy.

Brittany Hunter:
Brittany is a D.C.-based comic and storyteller. Life is filled with ups and downs and you can choose to laugh or cry. Brittany’s dark sense of humor celebrates the choice to laugh. She whole-heartedly believes that when we laugh we heal, and there is nothing better than being in a room full of people healing together.

NaLa Fridays at the Park

Paws on the Pike

We’re bringing paws back to the Pike with our annual pet fair. Join us for a day of pet-friendly fun and meet your local veterinarians, trainers, pet-sitters, boarders, dog walkers, groomers and more! Find your forever friend from a local shelter or stock up on homemade treats, there’s something for every pet parent.

A musical centered around activism, join us as we stop the presses and hear the rallying cry to create, affect, and promote change. A story of student voice and the power of youth, follow us as we take you through a turn-of-the-century New York City, where media bigwigs are fighting against youthful groups that make the distribution of their newspapers possible. Come see the amount of power that the collective voice of youth activism had in 1899, and judge how much power that collective voice has in our society today. Please note that the performance on Sunday, October 2nd will have Sign Language Interpretation

Think BIG! About the Future of Movement 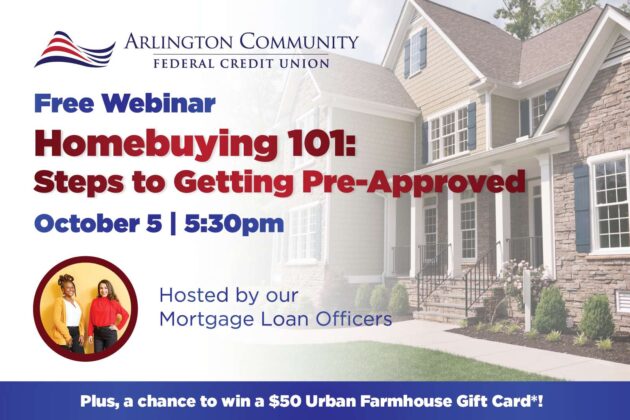 Homebuying 101: Steps to Getting Pre-Approved

Are you ready to jump into homeownership or started considering it but don’t know where to start? Financial preparation is key when thinking about purchasing your first home and the first step to getting pre-approved. Join ACFCU for our Homebuying 101 to learn more about the pre-approval process and what lenders are looking at, including your:

Plus, all attendees have a chance to win a $50 Urban Farmhouse gift card*!

Breakfast Connection Combined with the Alexandria Chamber of Commerce

The Pink Carpet Event Charity Fashion Show will feature our fabulous breast cancer survivors slaying the runway! Designers from Baltimore and the Washington, DC Metropolitan area will bring exquisite fashion and glamour to this event. Professional male and female designs and models will also be featured.
G﻿roup rates are available contact [email protected]

Teresa Oaxaca is a stand-out talent, both as painter and teacher. Nashville Arts Magazine wrote that “probing the highly imaginative, inspired mind of Teresa Oaxaca is not altogether unlike having a present-day conversation with an Old Master.” Join her for two full days of instruction, inspiration and feedback.

Class will start with two portrait painting demonstrations by Teresa for 3 hours each morning. After the demonstrations, students will be painting from life with a clothed live model. You may expect art talks and individualized critiques that will focus on materials, techniques, process, and artistic vision.  The class will also cover the palette with brush/palette knife color mixing. The idea is to get you jazzed up about painting, point you critically in the right directions and help you on an individual level as well. Limited to 15 students.

Washington, D.C. Out of the Darkness Walk

Reading with Libby: Accessing Library Books on Your Computer or Mobile Device