Sweetgreen will open in Central Place on Tuesday, July 11
The eatery has been preparing with staff training ahead of a soft opening
Sweetgreen is located at 1800 N. Lynn Street
Previous Image 1/3 Next Image

Rosslyn’s new Sweetgreen will open its doors on the ground floor of the Central Place apartment tower next week.

The D.C.-founded salad purveyor will be fully open for customers on July 11 at 1800 N. Lynn Street, after staff training and a soft opening in the days before.

A spokeswoman for the Rosslyn Business Improvement District said that new employees are being trained on making Sweetgreen’s various salads, then donating them to the homeless. Local advocacy group A-SPAN and D.C. Central Kitchen across the Potomac River will receive the prepared salads.

All proceeds from the eatery’s official launch on Tuesday will be donated to Dreaming Out Loud, a local nonprofit that looks to build healthy, equitable food systems.

This will be the fifth Sweetgreen in Arlington. Other locations are in Ballston, Clarendon, Crystal City and Pentagon City. 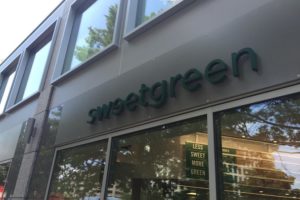 The Sweetgreen at 575 12th Road S. in Pentagon City, near the Whole Foods and the Orangetheory Fitness, is the chain’s eighth location in Northern Virginia and its fourth in Arlington.

Like the Sweetgreen that opened in Clarendon this summer, the Pentagon City location will be donating its opening day sales to help the hungry.

“The brand, dedicated to providing seasonal and locally-sourced ingredients, recently introduced warm bowls as a part of its ongoing menu innovation,” said a PR rep. “Guests can skip the line by ordering ahead on the Sweetgreen app and 100% of opening day proceeds go to Matching Dollars, a food access project a part of FRESHFARM.”

The Sweetgreen at 4075 Wilson Blvd in Ballston is closed for renovations.

New equipment was being brought into the restaurant Friday night when ARLnow.com stopped by. A sign on the door of the trendy salad shop directed customers to nearby locations in Clarendon and elsewhere.

“We’re refreshing our Ballston location so we can’t do our thing for a few weeks,” the sign said.

Located at 3100 Clarendon Blvd, the popular salad shop had a line stretching all the way out the door this morning for its official opening. It was similarly busy on Wednesday and Thursday as the restaurant gave away free food during RSVP-only “preview” events.

One hundred percent of today’s opening day proceeds were to be donated to the FRESHFARM Markets Matching Dollars program, which provides fresh, local produce to under-privileged communities in the D.C. area.

“It’s awesome that they donate the first day’s proceeds to a local nonprofit,” said one woman who was enjoying a “Guacamole Greens” salad inside the restaurant’s small dining area. She and her friends “actually biked [to Sweetgreen] from Rosslyn,” despite temperatures in the 90s.

A new Sweetgreen in Clarendon will open on Friday, July 8, a company rep tells ARLnow.com.

The restaurant is currently under construction on the ground floor of the 3100 Clarendon Blvd office building, near Pacers.

Salad purveyor Sweetgreen has been expanding quickly in Arlington. The company is also working to open a new location in Pentagon City.

A Sweetgreen restaurant is coming to Clarendon, according to construction permits.

Sweetgreen will be located in a restaurant space next to Bronx Pizza, on the ground floor of the recently renovated 3100 Clarendon Blvd office building. The space appears to be in the early stages of interior construction.

This will be the fourth Sweetgreen in Arlington. The salad purveyor also has locations in Ballston, Crystal City and another on the way in Pentagon City.

Thus far there is no opening date announced for the Clarendon Sweetgreen. The new location does not currently appear on the company’s website.

A previous effort at selling fancy, fast casual salads to the Clarendon masses, Rabbit, closed in 2013 after two years in business. It was located one block away from the future Sweetgreen. 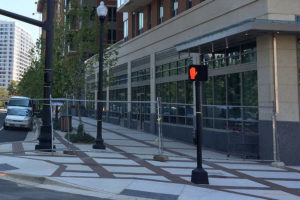 The businesses are coming to the ground floor of The Acadia at Metropolitan Park apartment building. That the same building in which a CorePower Yoga studio just opened.

Also coming to the building: a European Wax Center location. And, according to a retail leasing document, a thus-far unnamed coffee shop.

Orangetheory has existing Arlington locations in Rosslyn and Ballston. Sweetgreen recently opened in Crystal City and also has a Ballston location. European Wax Center has a location in Courthouse.

The 12th Street extension between S. Eads and Fern streets is rapidly becoming a powerhouse retail corridor, even though it’s a block from an existing, expanding retail hub: the Fashion Centre at Pentagon City mall. A Whole Foods and a Commonwealth Joe coffee shop will be opening this summer on 12th Street S., at The Bartlett apartment building.

Trendy salad purveyor Sweetgreen will be opening the doors of its new Crystal City location (2200 Crystal Drive) this Thursday, Feb. 11.

The store will be open from 10:30 a.m. to 10 p.m., offering organic salads and seasonal bowls. During the grand opening, Sweetgreen will be donating 100 percent of the day’s proceeds to FRESHFARM Market’s Matching Dollars program.

Another popular and growing local fast casual restaurant chain, Taylor Gourmet, is expected to open next door later this winter. 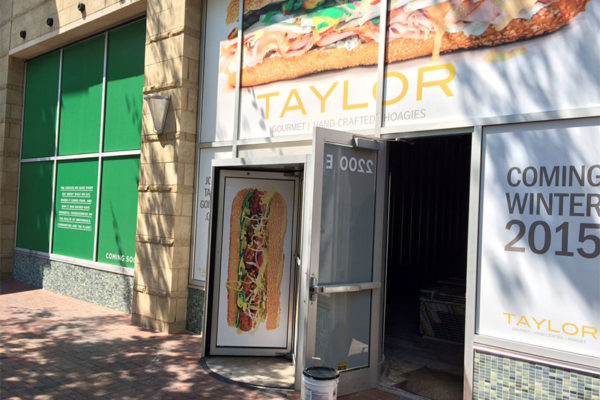 Located in the former Corner Bakery space on the 2100 block of Crystal Drive, the restaurants are both expected this winter.

“The Crystal City location should be opening by the end of the year, though we don’t have a firm date to share just yet,” said a PR rep for Sweetgreen.

This will be the second Arlington location for the two eateries; both have existing locations in Ballston. Corner Bakery closed in June.

Froyo and salad shop Sweetgreen has pushed the opening of its Ballston store back to Monday, Nov. 29, at the earliest. That date is tentative, a company rep tells us.

Despite the delay, the store is moving forward with a plan to celebrate the forthcoming opening by paying for a free yoga weekend at a neighborhood yoga studio.

This weekend, anyone who registers in advance can take free yoga classes at the Tranquil Space yoga studio (3528 Wilson Blvd). Participants will also get a free gift from Sweetgreen.