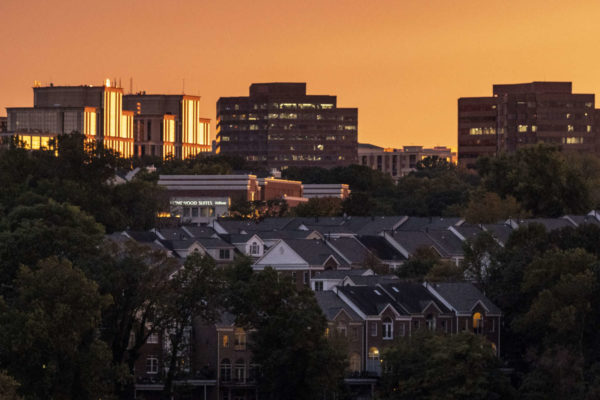 Board Shelves Pike Housing Proposal — “Arlington County Board members on Oct. 17… [removed] from consideration a staff proposal to change rules governing affordable housing on Columbia Pike. Board members, who had weathered intense community skepticism of the proposal when it first was heard in June, had placed the proposal back on their October agenda, and had recommendations from both the Planning Commission and county manager to approve it. But when critics again suited up to do battle, board members threw in the towel.” [InsideNova]

Another Top Bond Rating for County — “For the 20th year in a row, all three credit ratings agencies have reaffirmed Arlington County’s debt ratings of Aaa/AAA/AAA — the highest possible rating. Arlington is one of just 48 counties in the United States, and one of nine in Virginia, to receive this designation.” [Arlington County]

Amazon Donates to Antiracism Effort — “Amazon.com Inc. has donated $100,000 to Arlington County’s antiracism initiative. The company, which is setting up a headquarters in the Northern Virginia county, made the donation Oct. 14 and the county board will vote on whether or not to accept the funds on Tuesday.” [Washington Business Journal]

Arlington Woman Featured as Face of COVID — “One of those laid off was Serenety Hanley, whose career in digital communications included a stint in the White House under President George W. Bush. The 45-year-old single mother was let go from a retail job in March and now makes a living by shopping for Instacart… Hanley said she still can barely make ends meet.” [Thomson Reuters Foundation]

Va. Ventilator Usage Declines — “The number of Virginians being treated on ventilators for COVID-19 fell to a new low Monday, and case levels also declined somewhat from recent trends. The Virginia Hospital and Healthcare Association reported that just 81 patients were being treated statewide on ventilators, down from 95 the day before and the fewest since the association began publicly reporting COVID-19 data in early April.” [InsideNova] 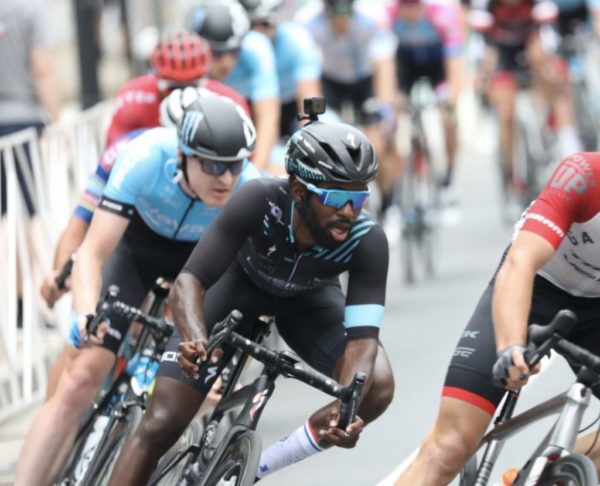 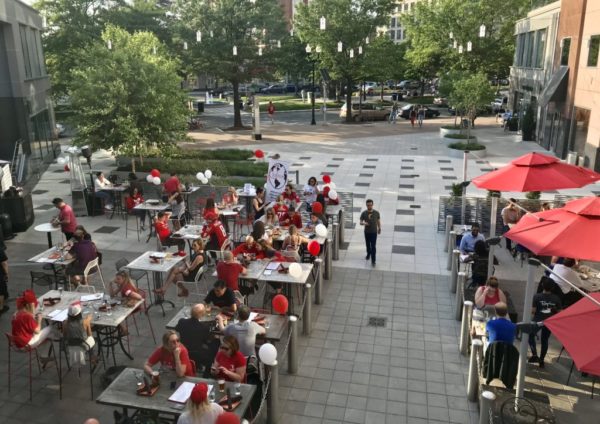 Arlington Rocks the Red — It was lit in Arlington during last night’s Stanley Cup Finals — literally. In Rosslyn, a swath of red and the words “ALL CAPS” was projected onto a prominent office building. In Ballston, the lights atop another office building were switched to red. [Twitter, Twitter]

Young Caps Fan Provides All the Luck — Parker Matthews, a 7-year-old Arlington resident, kept finding four leaf clovers on the ground during the Washington Capitals’ playoff and championship run. She would display the lucky keepsakes in front of the TV during games. [NBC Washington]

Celebrations Around Arlington — The scene last night after the Caps won the Stanley Cup in Game 5 was one of jubilation throughout Arlington. In some parts of the county, homemade fireworks were going off. In Clarendon, fans cheered in the streets while a fire truck used its horn to lead the crowd in a chant of “let’s go Caps.” [Twitter, Twitter]

Where to Buy Caps Stanley Cup Gear — The team store at the Kettler Capitals Iceplex in Ballston could have Stanley Cup championship merchandise as soon as Saturday, though the exact timing is unclear. [Twitter]

In Less Exciting News — “Rising interest rates already are impacting the amount Arlington County taxpayers will have to shell out for bond-approved capital projects in coming years. But county-government officials hailed the recent 2.99-percent interest rate received on sale of $153 million in municipal debt as a testament to the government’s rock-solid credit rating.” [InsideNova, Arlington County] 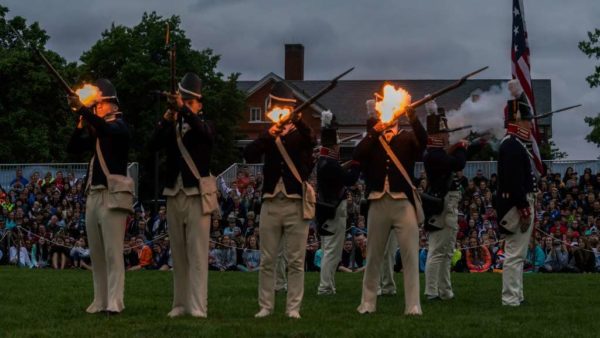 Kal Penn Spotted at A-Town — Eddie Lacy wasn’t the only famous person spotted at an Arlington bar over the past week. Actor and former Obama administration official Kal Penn was photographed hanging out at A-Town Bar and Grill in Ballston this past weekend.

Monday Properties Refinances Rosslyn Portfolio — “Monday Properties has completed an $888 million refinancing of its Rosslyn portfolio… resolving one of the largest chunks of expiring commercial real estate debts taken out before the recession.” Meanwhile, Monday says that Nestle moving its corporate headquarters to 1812 N. Moore Street “has prompted other prospects to consider Rosslyn that wouldn’t have in the past.”  [Washington Business Journal]

Nearby: Video of Fire in Falls Church — Arlington County firefighters assisted on a shed and house fire in the Falls Church section of Fairfax County last week. The blaze was caught on video by a neighbor. [Statter 911] 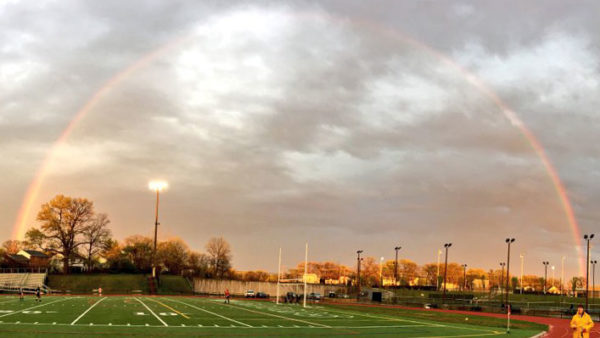 Aurora Hills Library Eyed As School Site — The current Aurora Hills library and senior center is being looked at by Arlington Public Schools as a possible site for a new elementary school. Meanwhile, even though nearby Oakridge Elementary is over capacity, Superintendent Patrick Murphy says there’s actually a more pressing need for additional elementary capacity in north Arlington due to population growth around the Rosslyn-Ballston and Lee Highway corridors. [InsideNova]

CEB Acquires Portland Firm — Rosslyn-based CEB is getting bigger. The company is acquiring Portland, Oregon-based Evanta Ventures for $275 million. CEB will be moving into a new namesake CEB Tower in Rosslyn after construction wraps up in 2018. [StreetInsider] 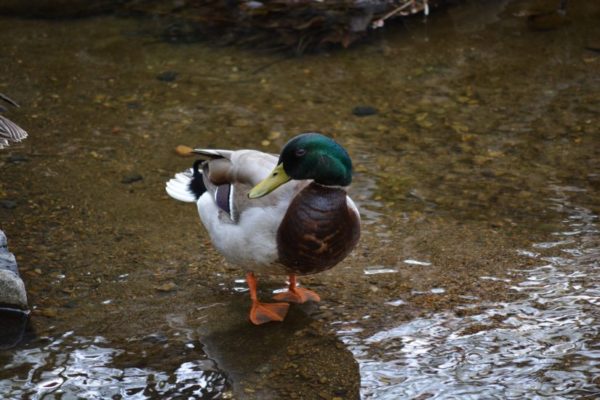 Power Outage at Courthouse Metro Station — A power outage has been reported at the Courthouse Metro station. The outage turned off most of the lights and trapped some customers in the station’s elevator, according to Twitter accounts. The station is said to now be operating on emergency power. [Twitter, Twitter]

Interview with John Vihstadt — Washingtonian has published a Q&A with Arlington County Board member John Vihstadt. During the interview, Vihstadt said of county government: “by and large, it’s well managed.” Before he was elected, however, Vihstadt said the county was in danger of losing its way. “There was a growing consensus that we were too self-congratulatory. There was too much ‘Aren’t we doing great?’ And if there was room for improvement, it was nothing another taxpayer dollar couldn’t solve.” [Washingtonian]

Garvey on I-66 Widening — In a county-produced video, Arlington County Board Chair Libby Garvey discusses the somewhat controversial VDOT plan to widen a portion of I-66 in Arlington. [Facebook]

Rising Sea Levels and Arlington — A new interactive map shows what rising sea levels would mean for D.C. and Arlington. The good news is that the two meters of sea level rise predicted to occur by 2100 would result in little impact for most of Arlington; the most vulnerable areas are portions of Reagan National Airport, East Potomac Park in D.C. and other areas along the banks of the Potomac. [Washingtonian]

One Year Anniversary for Shirlington Restaurant — Osteria da Nino in Shirlington (2900 S. Quincy Street) is celebrating its one year anniversary on Sunday. The restaurant will offer a complimentary glass of Prosecco and appetizers for guests from 4-6 p.m. [ARLnow] 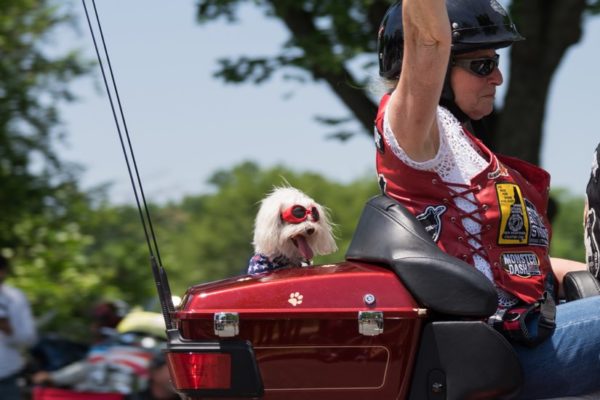 For the 14th straight year, Arlington County has received a perfect Aaa/AAA/AAA debt rating from the major credit rating agencies.

Arlington is one of only 39 U.S. counties to receive the highest possible rating. The rating will enable Arlington County to borrow money at a lower rate than other, less creditworthy jurisdictions.

“As the County continues to fund critical general government and school capital needs, this reaffirmation of our triple – AAA rating, is an important validation, which allows us to enjoy lower interest rates for our General Obligation bonds and use every dollar as efficiently as possible,” said County Manager Barbara Donnellan.

Having a Aaa/AAA/AAA rating ensures that the County will enjoy lower interest rates for its upcoming sale of the Series 2014 General Obligation Public Improvement and Refunding Bonds the week of May 26.

Dangerous Heat Prompts AWLA Rescues — The Animal Welfare League of Arlington has shared photos of four dogs it rescued in the recent heatwave. Among them are dogs left in hot cars, tied up in a parking lot and in cages in a backyard without adequate water. [Washington Post]

Bomb Squad to Receive Protective Vest Donation — The Arlington County Fire Department’s bomb squad will receive a donation of two tactical protective vests next Tuesday. The vests will protect bomb squad personnel in explosive-related situations. Worth nearly $20,000, the vests are being donated by Firehouse Subs.

Lander Defends His Record — School Board member James Lander, who’s running for re-election and facing a challenge for the Democratic endorsement, is defending his record when it comes to school redistricting, student transportation and his support of Superintendent Dr. Pat Murphy. Lander says he “will continue to press for ways to improve student achievement and address the needs of a growing school population without breaking the bank.” [Sun Gazette]

‘Two Wheel Tuesday’ Event Tonight — The county’s BikeArlington program is holding its fourth “Two Wheel Tuesday” educational event of the year. Tonight’s event is “Savvy Cycling Tips,” which lets interested riders “learn the best tips on safe biking so you can ride in traffic comfortably.” The event will be held from 7:00 to 8:30 p.m. at Westover Library (1644 North McKinley Road). [BikeArlington]