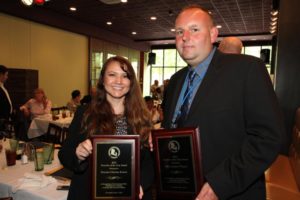 Two members of the Arlington County Police Department were recognized for their investigative prowess at a luncheon hosted by Arlington County Crime Solvers yesterday. Officer James O’Daniel and Detective Christine Everest both received the Detective of the Year Award for their efforts to end fraud and scams targeting the elderly.

One police official said the pair’s efforts were part of the department’s “War on Woodchucks” — a reference to the name sometimes given to scam artists who prey on senior citizens by performing unnecessary yard work and charging exorbitant amounts of money for it. Some of the offenders repeatedly target the same victims, or inform other scam artists of who to target. It’s not unusual for some of the victims to lose tens of thousands of dollars during interactions with woodchucks.

Even after being asked about winning the award, Everest turned the attention back to helping the elderly. She encouraged people to watch out for their neighbors and to call the police if they notice something suspicious. She added that there’s still a long road ahead in the fight to end these kinds of crimes in Arlington, and she’d like to see tougher laws put in place to bring the scam artists to justice.

“We’re both appreciative that the focus of today was on crimes against the elderly,” Everest said. “It’s out there and it’s unfortunate, and these are not small amounts that we’re talking about. You can have one individual who can have upwards of hundreds of thousands of dollars being taken from them from scams. A lot of times these individuals come in contract with a dozen or more people who are scamming them for this money.”

“As a sidenote, I guess we’re getting a little bit of a tribute ourselves,” Everest added. “We were not expecting anything like this. The recognition is overwhelming.”

Arlington County Police spokesman Dustin Sternbeck explained that in addition to their usual work, Everest and O’Daniel created informational brochures to help people identify if they’d been victimized, and to let victims know where to go for help.

“It’s important to note that both of these individuals didn’t just do the minimal amount required. They went above and beyond their typical day-to-day work on the streets,” said Sternbeck. “From the chief level down, we’re very proud to have them represent us.”

Some of Everest’s notable contributions include displaying compassion and establishing a rapport with victims, researching suspects and conducting surveillance in areas known for being targeted. 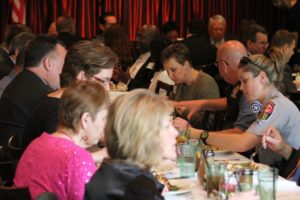 One of O’Daniel’s major accomplishments was performing traffic stops after observing questionable solicitation practices by known scam artists, which led to additional violations such as identity theft. He also exhibited proactive enforcement by speaking with residents who were having repair or yard work done.

The luncheon, which raised money that will support Arlington County Crime Solvers, was attended by a number of local officials and lawmakers, including County Board member Walter Tejada, Police Chief Douglas Scott, Commonwealth’s Attorney Theo Stamos, Del. Bob Brink, Del. Patrick Hope, Del. Alfonso Lopez and state Sen. Adam Ebbin. Lopez said this year’s awards will help highlight the problem of scams against the elderly, which often don’t receive as much attention as better-publicized crimes like robberies and burglaries.

“The two people who won the award today are doing critical work to try to protect elderly [residents] who are being scammed by folks coming to their houses,” Lopez said. “This is a scam that’s happening far too often, and it’s hurting the elderly and immigrant populations more than others.

Lopez added that Everest and O’Daniel’s effectiveness in investigating such crimes is “a testament to how good our community policing efforts are in Arlington.”