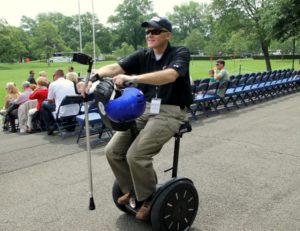 The charity Segs4Vets arranged to give the vehicles to the wounded warriors, many of whom are amputees. Some of the Segways are specially outfitted to accommodate individual disabilities, such as having a built-in seat for when the user becomes too tired to stand.

Jerry Kerr started the organization in September 2005. He had broken his neck in 1998 and was paralyzed from the neck down. Although he has some movement now, he was told he would never be able to walk again. That prompted him to devote time to investigating what technologies were available to allow him to become more mobile.

“When I became permanently disabled, when I realized that my world had changed forever, I started to learn about what we had, how I was going to get around, how I could interact in society again,” said Kerr.

Kerr has particular interest in technology that aids people without drawing attention to their disabilities. When the Segway came out, he found it fit the bill.

Once Kerr discovered how much his life had improved through the use of a Segway, he got the idea to give one to an injured person returning from Iraq or Afghanistan, and the program has blossomed since then.

The Arlington County Police Department helps out Segs4Vets by providing training to the recipients, many of them coming from Walter Reed Medical Center. This allows the users to learn about the vehicles and get on them right away instead of having to wait for the once-a-year training sessions held in Washington D.C., San Antonio and San Diego.

“It originally started because they needed a place to store the Segways, and ACPD was interested in storing some of them,” said ACPD Retired Captain David Herbstreit. “Out of that, we saw an opportunity to go ahead and step into it a little deeper.”

Herbstreit is one of the founding members of the partnership between ACPD and Segs4Vets. Now, there are nearly two dozen participants in the ACPD. Lt. Mark Belanger is one of them. He’s been assisting for about nine months and has trained 18 Segway recipients, along with their spouses and other family members.

“It’s important that there’s a local group they can turn to,” said Belanger. “It’s nice to get someplace close, they don’t have to wait a year.”

Retired Staff Sgt. Robert Canine is one of the many who traveled from across the country to be at the ceremony. He received his Segway in the fall of 2010, and now volunteers with Segs4Vets.

Canine lost both legs below the knee from an injury he sustained in May 2009 in Baghdad, Iraq. He explained that an armor-penetrating explosive device hit the vehicle he was in, and he feels lucky to be alive.

Canine went through physical therapy at Walter Reed Medical Center for a year and half. He couldn’t walk well on his new prosthetics, but received his Segway within months of returning home. Canine says it’s been a huge boost to his mobility and allowed him to get around outside.

“I could keep up with my son on his bike, I could walk the dog,” said Canine. “It just felt good to be able to do something.”

Canine said the device is particularly helpful when he needs to get around campus at the University of Missouri, where he’s attending classes. The Segway allows him to move more quickly, and prevents him from becoming exhausted while walking.

“It’s a great mobility tool to help me get through the day,” said Canine. “I’m very grateful for the Segs4Vets organization.”

Corporal Brandon Rumbaugh lives in Silver Spring and heard about the program through his physical therapist. He claims he feels lazy sitting in his wheelchair all day, and is excited to be able to use his new Segway when out in public.

“It’ll be nice to get out of my wheelchair and be able to stand up instead of always sitting down,” Rumbaugh said. “Eventually, I just want to get rid of my wheelchair.”

During the Segway training sessions, recipients learn how to handle the device and safely operate it around other people. They also learn how to get on and off, how to handle falls, safety for going through doors and potential hazards they could encounter like wet or uneven surfaces.

“It’s hard at first, but it’s just like riding a bike,” Rumbaugh said.

Currently, Segs4Vets has given away more than 900 Segways, and has a waiting list of more than 1,000 people.

“Every year we get further behind. Our list of applicants grows every year,” said Kerr.