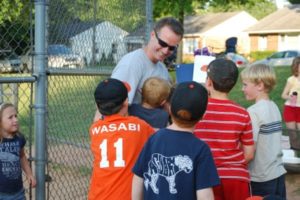 A local Little League coach received some recognition for all of his time working with children and teens, just before deploying to Qatar.

Col. Randy Huiss, better known as “Coach Randy,” coaches the Orioles Little League team. After their final practice before “the big championship game” last week, the team and the Arlington Partnership for Children, Youth and Families honored Huiss with a Connect with Kids award. The awards are given to people who go above and beyond in spending time with, and building relationships with, children and teens.

Parents of the players are fans of Coach Randy’s interactions with the kids. They say he has a positive view of how the game should be played, with a focus on fun.

“Randy’s focus has never been on winning the games, but on letting the kids play,” said Amy Yamashiro. “It is these precious experiences that make kids, like my son, very happy and greatly increase enjoyment of playing on a team.”

Parents also say his attitude is something that the kids can look up to and emulate.

“Every game has been a positive experience that included teaching good sportsmanship based on respect for each other,” said Tracy Gaudet.

The Connect With Kids awards are given in the spring and the fall each year. However, a special exception was made to give the award early, because Huiss had to deploy to Qatar on Tuesday, June 19.

“We’re very pleased we could present this to him before he left,” said Mary Ann Moran with the Arlington Partnership for Children, Youth and Families. “He really gets it about children and sports and what’s important and what isn’t.”