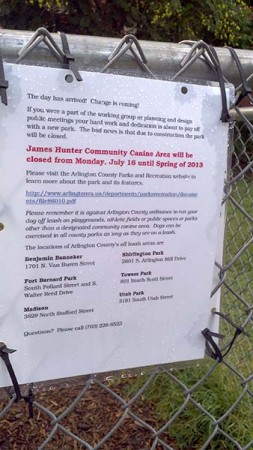 In less than a week, James Hunter Park in Clarendon is closing for its planned renovations. A sign has been posted announcing the park will close on Monday, July 16, and will remain closed until next spring.

In May, the County Board awarded a contract for renovating the park, which is located at the corner of N. Herndon Street and 13th Street. The contract is worth more than $1.6 million.

The Department of Parks and Recreation’s website lists some of the sustainable features of the park’s design, such as using recycled materials during construction. Workers will also install a solar power system that will power the park’s signs, lighting and irrigation system.

There will be a system to collect, purify and store rainwater on the site to irrigate the park. The underground storage will maintain a constant supply of water to surface plants, which will cut down on excessive watering.

In addition to an area for dogs, the park will have pedestrian areas, an open lawn, gardens and public art.

Delays with the plan caused the revamp not to be ready by this summer as originally planned. Currently, the project website lists the park’s re-opening date as late February 2013.