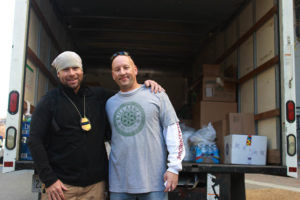 (Updated at 10:55 a.m. on 11/10/12) For nearly two weeks, stories of devastation have continued pouring out of New York and New Jersey, where Hurricane Sandy struck the worst. Today, members of the Arlington County Police Department did their best to ease the pain of some of the hardest hit victims.

Sgt. Steve Meincke and Det. Colin Dorrity (who is with Metro Transit Police) are both from Toms River, NJ, an area that experienced widespread devastation. Hearing about the hardships their family members and friends are enduring in the surrounding areas prompted Det. Dorrity to ask Sgt. Meincke about sending out an email to the entire department, asking for donations of supplies. The response was overwhelming and in just one week, the effort exceeded Det. Dorrity’s anticipated goal of one carload of supplies. Instead, the haul required a moving truck.

The donations will go to the Keansburg, NJ police department to be distributed to those in need. The department headquarters was demolished in the storm, so officers there are working out of an old building. Det. Dorrity has a friend on that force, who sent a request for help.

On top of the existing devastation from Sandy, this week’s Nor’easter left homeless victims facing freezing temperatures and up to a foot of snow while trying to clean up their towns.

“Now that the second storm hit, they’re dealing with the snow issue, and no power,” said ACPD spokesman Dustin Sternbeck. “We’re just trying to provide some items for these families who are going through a tough time. Items for infants and babies, food, and basically anything that can keep people warm up there.”

There was a big push to get not just warm clothing and food, but also games and toys to keep displaced children occupied while they stay in shelters. Animal food is another item that’s often forgotten but is in high demand. Many people brought their pets to the shelters, but shelters don’t have a supply of foods for pets.

On Wednesday (November 7), Det. Dorrity helped take two trucks of supplies to New Jersey. Those items were donated by members of various law enforcement agencies throughout the D.C. metro area, along with a couple of schools. He said seeing his hometown in such a state was painful.

“It’s really bad up there, it’s really terrible. It’s hard, you know, when I went up the past few days,” he said. “Seeing your home and a National Guard checkpoint in your neighborhood, it’s a little bit surreal.”

More, including photos, after the jump.

Det. Dorrity may end up doing another run of supplies early next week. He plans to take off of work for the rest of November to assist with cleaning up his hometown and with rebuilding houses.

“It’s a long road to rebuild some of these towns from memory, because a lot of stuff is just gone,” he said.

Sgt. Meincke noted that donations of police equipment, such as flares, are also making their way to the Keansburg police. He wishes he were able to offer one of the most needed commodities — gasoline — but it’s not legal to transport through the various tunnels. For now, he said the focus is on keeping the victims warm.

“They don’t have anything. It’s getting cold, winter’s coming up, Thanksgiving’s coming up. They literally lost their entire homes,” Sgt. Meincke said. “The time it takes for FEMA to get there, home insurance, stuff like that it’s just taking forever to get the help they actually need. This is just a small, small dent but at least it helps them out with the basic stuff.”

The moving truck full of ACPD donations left this afternoon, so victims should start receiving the items tonight.

Anyone interested in donating to the Hurricane Sandy relief effort is encouraged to do so through the American Red Cross.