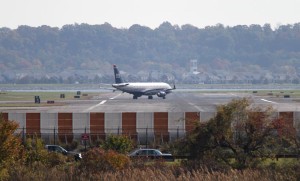 Don’t be alarmed if you see what appears to be an aircraft accident at Reagan National Airport on Saturday (September 21). It’s part of a planned emergency preparedness exercise.

From 8:30 a.m. until around noon, the simulation will test the airport’s emergency response teams. Airport and airline staff, hospital staff and other emergency personnel will receive hands-on training during the aircraft accident simulation.

Emergency personnel will perform the exercise in the secured airfield operations section of the airport, so normal passenger flights will not be affected.

Staff will respond as if the simulation is a real emergency, including using sirens and firefighting equipment. To add realism to the simulation, a training aircraft will be ignited, boats will deploy, helicopters will respond and nearly 150 volunteers will play patients who need to be rescued from a U.S. Airways aircraft and transported to the hospital.

Some parts of the exercise might be seen or heard from areas near the airport, such as Route 1, George Washington Memorial Parkway, I-395 and along the Potomac River.