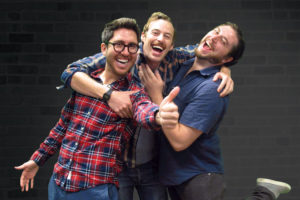 Comedians from the comedy website CollegeHumor are coming to the Arlington Cinema and Drafthouse next month.

The comedy duo Jake and Amir — Jake Hurwitz and Amir Blumenfeld — and CollegeHumor Executive Editor Streeter Seidell will perform Thursday, Nov. 14, at 7:30 p.m. Tickets are $15 and only ages 18 and up will be admitted.

Arlington is the first stop of the trio’s nationwide tour, for which they’ve shot a brief comedic promotional video. Jake and Amir’s online comedy series has won several “Webbies,” while Seidell is also the co-host and writer of the MTV show “Pranked,” along with Blumenfeld.