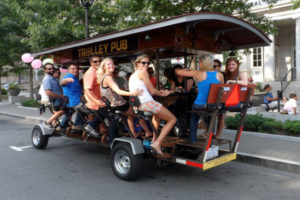 Proposed legislation in the Virginia General Assembly would allow patrons of Arlington’s Trolley Pub to drink alcohol while on board.

Del. Patrick Hope (D-47) has introduced House Bill 423, which would allow passengers on vehicles with a common carrier — which would include limousines and motor coaches, in addition to the Trolley Pub — to consume alcohol.

The Trolley Pub in Arlington launched last year but has been unable to serve passengers alcoholic beverages, as it does in its original market of Raleigh, N.C. Instead, it stops at bars and restaurants in Clarendon and lets passengers debark to drink.

The Sun Gazette, which first reported on the bill, suggested that Hope’s legislation might not sit well with Arlington County Board members.

“Board members last year blasted the entire concept of the trolley pub, and only calmed down (slightly) when they learned that those using it could not consume alcohol,” the newspaper reported. “But they have remained upset about the human-powered trolley’s impact on traffic in one of Arlington’s most congested areas.”

The Trolley Pub debuted in Arlington in March, and at the time owner Kai Kaapro said he believed the business was “perfectly legal.” That was backed up by a preliminary police review. A ruling in April by the Virginia Department of Alcoholic Beverage Control Board, however, later determined no alcohol could be served on board.

Drinking in a vehicle in Virginia is currently only legal on chartered boats. The bill was assigned to the General Laws committee and is now in subcommittee, according to the General Assembly’s website.