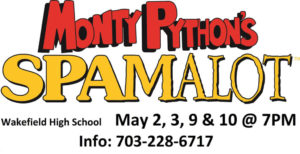 Wakefield High School’s theater department is conducting a performance of the Tony Award-winning musical “Spamalot,” based on the comedic film classic “Monty Python and the Holy Grail.”

The musical, which ran on Broadway from 2005 to 2009 and won the Tony Award for Best Musical in 2005, is based around the classic movie, with original songs and, as Wakefield’s press release said, “a bevy of beautiful show girls, not to mention cows and killer rabbits.” The show is considered PG.

Tickets will be $10 and are sold at the door only. More information can be found on the Wakefield theater’s website.

END_OF_DOCUMENT_TOKEN_TO_BE_REPLACED

More Stories
I-66 Eastbound Shut Down Due to AccidentYour Beermonger: Just Because You Like It