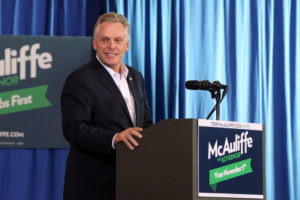 Gov. Terry McAuliffe (D) plans to help more than 200,000 Virginians without health insurance secure coverage, he announced yesterday in a move that follows the defeat of Medicaid expansion in the Republican-controlled General Assembly.

McAuliffe unveiled a 10-point plan through which the majority of the newly covered — about 160,000 — will get assistance signing up for via the federal Affordable Care Act. The Center for Medicare and Medicaid Services has approved $4.3 million for outreach to help eligible individuals sign up, McAuliffe announced.

The plan includes measures to provide more and better care to those with mental illnesses, give dental care to pregnant women on Medicaid and FAMIS and launch a website “to inform Virginians of their coverage options and help them enroll,” among other platforms.

“As governor, there is no greater responsibility than ensuring the health and safety of the citizens you serve,” McAuliffe said in a statement. “Through my plan, I am taking action by authorizing four emergency regulations and issuing one executive order that will address urgent health needs and put us on a pathway toward Building a New Virginia Economy. However, these steps are just the beginning, and we must continue to press forward together to achieve better health for all of our citizens.”

“The emperor has no clothes,” Shipley said. “Once again, Terry McAuliffe has far over-promised, and mightily under-delivered.”

Rep. Jim Moran applauded McAuliffe’s actions, saying 400,000 Virginians were “left out in the cold” when the General Assembly rejected the option to expand Medicaid.

“Governor McAuliffe’s initiative, A Healthy Virginia, will help to right that wrong and secure quality healthcare for those Virginians most in need,” Moran said in a press release. “Unfortunately, the Republicans running the Commonwealth’s legislature are committed to their partisan agenda and continue to block healthcare for the 400,000 Virginians who need it most. Thankfully, from mental healthcare for the underprivileged to accelerated access to treatment for our veterans, this plan goes a long way to reaching the goals of the Affordable Care Act.”

“While the Governor’s plan is a welcome and creative step in the right direction, it is not the solution, nor the remedy for Virginia’s ailing coverage gap issue,” Sullivan’s campaign said in an email.

“Gov. McAuliffe’s announcement today will enable many more Virginians to access quality, affordable healthcare,” Sen. Barbara Favola said in a statement. “But as the governor said, there are no substitutes for closing the coverage gap. We’re still missing an opportunity to save lives, save money and help keep endangered hospitals open for business. That means Republicans still need to come to the table.”