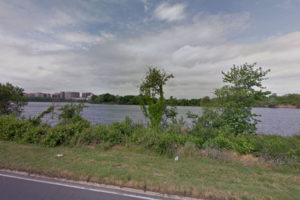 U.S. Secretary of the Interior Sally Jewell will lead an effort to clean up the shoreline at Roaches Run Waterfowl Sanctuary near Crystal City tomorrow (Thursday).

The Department of the Interior oversees the National Park Service, which is in the middle of a process of environmental and access enhancements to the sanctuary and to Gravelly Point Park, across the George Washington Parkway from the sanctuary. To help out with that project, Jewell and volunteers from AmeriCorps and the Student Conservation Association will plant “native wetland species,” remove invasive plants and clean up trash from the sanctuary’s shoreline.

The program will start at 11:30 a.m. and the cleanup efforts will go until 4:00 p.m. The cleanup is meant to not only help with the ecosystem of Roaches Run, but also to commemorate the 13th anniversary of the Sept. 11, 2001 terrorist attacks, as part of the September 11th National Day of Service and Remembrance.

“The day is going to be commemorating 9/11 and recognizing the importance of giving back to the community through hands-on service work,” SCA events manager Lori Robertson told ARLnow.com. “Because it’s so close to such an urban area and really close to the parkway, [Roaches Run] has been neglected over time. [The NPS] is trying to rehab and restore its health.”

The event is also part of Jewell and Interior’s youth initiative. About a third of the Interior Department’s staff will be eligible to retire within the next five years, according to Jewell. As a result, the department is looking to recruit young people who can be the nation’s future stewards of public lands.

“I’ve had the privilege of being out on many service projects in the outdoors with young people,” Jewell says in a video about the initiative. “One thing that strikes me is, when they get their hands dirty working on the land, when they make a difference and they build a segment of trail, they never look at that place in the same way.”