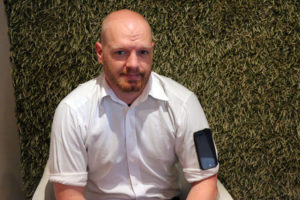 A former professional poker player is getting ready for a new gamble: launching a Kickstarter to help fund his new smartphone “wearable” company, OnYou.

James Rogers and Scott Bauer co-founded the company this February, and have been refining the designs of their high-tech cases and associated magnets, which keep phones attached to the user’s body without a strap or a clip.

Rogers designed the case when he ordered industrial-strength magnets, took apart his own iPhone case and reconstructed it as a wearable. The cases he plans to bring to market will use “the absolute newest materials” available, including, he said, new carbon filaments “just invented last month.”

The magnetic cases are secure and comfortable, Rogers said.

“Everyone has smartphones and everyone loves to exercise,” he said. “Everyone’s been using armbands, and in talking to people, the vast majority of people are dissatisfied with them. We designed something that’s very comfortable and it’s about as secure as you can get.”

The magnets use 12-pounds of force, and Rogers put them through a series of tests, including kicking a field goal with the phone attached to his shin with one of OnYou’s compression sleeves. The phone didn’t budge, he said, and even if it did, it would still be protected by the carbon case. Rogers said for those worried about having their phones stolen, the cases will come with a safety strap.

To this point, Rogers and Bauer have developed prototypes using 3-D printers, including the one at Crystal City’s TechShop, where Rodgers is a member. The Kickstarter, which will launch Oct. 1, will aim to raise $20,000 and largely pay for an injection mold to mass produce the cases, since it will take about an hour for each to be printed. The funds will also be used to expedite OnYou’s patents and, if the goal is reached and exceeded, to develop specifications for more devices. At first, OnYou will only make cases to fit the iPhone 5, 6 and the Samsung Galaxy S5.

The cases will be sold for $49.99, Rogers said, and they will be just as durable and protective as the highest-end cases on the market for as much as $90. The cases can be pre-ordered on OnYou’s website now for $39.99, and include arm and calf compression sleeves. Rogers said he anticipates selling iPhone cases this winter, followed by models for other phones.

The magnets are safe around phones — magnets don’t affect the flash memory storage — and largely safe near credit cards, but those with pacemakers shouldn’t have the magnets on their bodies. 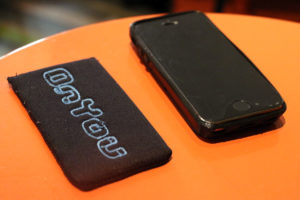 While exercise is OnYou’s “entry point into the market,” Rogers said, his hope is for his “OnUsers” to develop more “OnUses” for the OnYou cases.

“Doing research and talking to women, so many of them brought up sticking the magnet near the top of their purse so they never have to dig for their phones,” Rogers said.

“We thought it would be fun for people to show us that while it’s great for exercise, what about this?” Rogers continued. “We want to develop an online community to contribute more and more OnUses.”

Rogers was a paralegal when he began playing online poker. He quickly realized he made more money playing poker than he did at his day job, so he quit and started playing professionally, including by attending the World Series of Poker in Las Vegas. When Congress passed laws restricting online gambling, Rogers got a job as a software engineer.

He realized he wanted to be an entrepreneur, and now he and Bauer, a graduate student at George Mason University, have brought their company to GMU’s Innovation Lab. They’re in discussions now for an initial funding round.