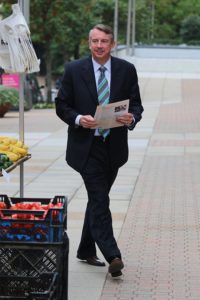 Ed Gillespie is the Republican challenger for Sen. Mark Warner’s (D) seat in the Nov. 4 election, and he knows he has an uphill battle to claim votes in deeply Democratic Arlington.

Gillespie is behind by double-digits in statewide polls, but he sees an opportunity in Arlington to connect with young voters frustrated by the lagging economic recovery.

“We enjoy a lot of strong support here from a lot of young professionals,” he said. “There’s big numbers here, and we have to get our numbers up. It’s an important part of the Commonwealth. I want to be a servant leader for all Virginians, that means taking your message everywhere, including places that I know historically, in the voting patterns, aren’t Republican strongholds. But that doesn’t matter to me. I think it’s important to take your message everywhere.”

Gillespie served as Chairman of the Republican National Committee and counsel to President George W. Bush, and started his own lobbying and consulting firms. His consulting firm, Ed Gillespie Strategies, closed in Old Town Alexandria earlier this year to allow Gillespie to focus on his campaign.

Gillespie is against same-sex marriage, but said he prefers to let the states legislate their own marriage laws.

Gillespie lives in the Mount Vernon area of Fairfax County, and said “there was a time when I used to play golf,” but he spend most of his time on the campaign trail or with family nowadays. The time he spends in Arlington, he said, is either campaigning or making the occasional trip to the Pentagon City mall. Gillespie visited Rosslyn’s ÜberOffices last week and sat down with ARLnow.com for an interview. 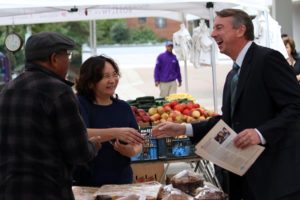 Around his favorite Arlington hangout, office vacancies have skyrocketed in the years since the Pentagon’s Base Realignment and Closure plan that moved thousands of defense jobs out of Arlington. Gillespie said he doesn’t think the BRAC process needs to be changed, but admitted “it has made mistakes.”

“We’ve cut about $986 billion from our military and our defense since Sen. Warner took office, $500 billion through the sequester, which is a random, arbitrary and deep cut,” he said. “I would work to restore those cuts because I think our military does need to be a higher priority than it is under this administration. ”

Gillespie wants to replace the Affordable Care Act and “supports oil, coal and natural gas production, including deep sea drilling.” He also said he advocates widening I-66, both inside and outside the Beltway.

Gillespie said he realizes Arlington “has got a set of priorities” — county leaders have repeatedly opposed proposals to widen the Arlington stretch of I-66 — but thinks the highway should be widened regardless.